Wiggle and wobble your way to more bites. 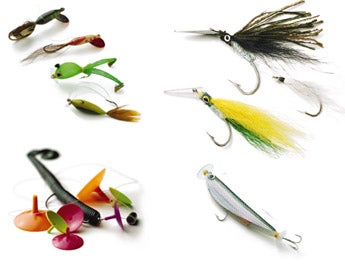 There’s nothing subtle about a big slab-metal dodger whirling and thumping ahead of trolled bait. Someone once likened seeing a dodger to being hit in the eye with a polished brass doorknob. In-your-face is where it’s at for some presentations, however, and nobody I know who tows ultralight spoons, streamers, squidbaits or even plugs for salmon or lake trout would be caught dead without those front-running attractors.

The flashing blades and beads on a walleye angler’s spinner rigs follow the same principle. But besides reflecting light and color, dodgers and flashers add a kind of spastic dance action to a trailing lure. This is a good thing for lures that don’t vibrate or dance on their own and just glide through the water without so much as a shiver. And now there are similar devices-much smaller than dodgers and without all the flash-that add the same sort of exciting action to smaller lures, such as soft-plastics, streamer flies and fly-rod poppers.

Small-Fry Wigglers
Thom Hnizdor, founder of B-17 Fly Tackle, the iconoclastic company that designs tradition-busting lures and flies, has developed plastic action enhancers called Quickie Heads. You’ll find them on many of B-17’s unique and creative lures (both for spinning gear and fly rods), and they are available in separate packaging. The company also produces fly-rod poppers and sliders with crankbait-like diving lips in crayfish and shrimp, among other designs. Here again, the lips are available separately so you can incorporate them in your own poppers, streamers or floating jigheads. (313-255-2838; www.B-17swimsuit.com)

The key to small action-adding devices, whether in the form of disks or bills, is that they produce truly unique action in light lures or flies that normally rely on material movement or skilled angler manipulation to bring out their best. A “new look” to a lure becomes increasingly important in heavily fished waters. That’s one of the reasons Stanley’s Streamer is so effective.

The brainchild of Michigander Stan Lievense, the original streamer is a tandem (two-hook) trolling fly with metal lip and a hair-dressed stinger hook. Because of its inherent light weight, the lure is tossed back and forth in the water at a faster rate of vibration than many popular minnow-type hard lures.

A new version with a single hook is designed for casting either with fly rod or spinning gear (with a split shot or float). The bill-or “bib,” as Lievense prefers to call it-is plastic. Available in two sizes, the streamer is a dynamite multispecies fish catcher when worked down and across current, under overhangs, around rocks or through woody debris. Fly-casters who fish running water need the patience to retrieve the Stanley’s Streamer (or any similar lure with an action enhancer, for that matter) fairly close before attempting a pickup, because of water resistance. (231-946-8042)

[pagebreak] Shimmy Physics
Action Discs are the latest and perhaps most versatile action enhancer. They look something like an oversized golf tee. Dean Teegarden of Boise, Idaho, created them. Looking for a way to add action to the big wool-head muddlers he made, Teegarden tied in a plastic collar. “It produced but it was awfully work-intensive,” he says. “And when you lost one you wanted to cry.”

After some experimentation, Teegarden came up with another disk-type action adder, but with two differences from the original. The disk face is now concave, and he added a stem behind the disk to keep it away from the lure.

At first Teegarden rigged Action Discs on the lures he sells, which include the WiggleRig and SoftFloat-essentially floating jigheads dear to the hearts of anglers who target walleyes, kokanee salmon and smallmouth bass. Now the vibrators are sold separately, too, and Action Discs are popular for Carolina, Texas or drop-shot rigging.

Endless Possibiliities
Used with Texas rigs, the slip sinker should be added to the line above the disk. After the rig hits the water it sinks more slowly because of the disk’s resistance. And the bait will also be swimming along on a sloped descent, which is more natural than a vertical free-fall. For drop-shotting, add a small secondary weight behind the disk on the dropper just before the main line knot. Once the drop-shot sinker has settled, lower the rod tip to make the bait wiggle-swim down. Follow that with an upward snap of the rod tip.

As with other disk devices, flies and topwater lures-even squid-can be made more enticing to fish with an Action Disc. No fly or lure is off-limits because of the range of disk sizes. Whichever size is used, it’s best to place a small split shot up the line to keep the disc from sliding forward. A piece of rubber band tied on the line and then snipped close does the same job. Used in downrigger, side-planer or flatline trolling setups, Action Discs assure straight tracking of a lure; there’s no diving into the bottom or sideswiping other lures trolled nearby, regardless of the depth. (208-388-8539; www.wigglefin.com)

Autumn Strategies
Once the late-summer/early-fall lake turnover is done and all that soupy green gunk in the water is gone, some of the year’s best lake fishing will pop like a July 4 firecracker. Offshore reefs, shoals and extended points will be good, but so will cover nearer to shore as the water clears and cools. The trick here is to work the weeds, brush and timber near deeper channels first. As the water cools further, many fish make a last feeding flurry in truly shallow water, then head offshore a bit because frosts start killing off green emergent vegetation near the bank. When that happens, move out again and work the deeper weeds.