With Scoundrel, everything old is new again. 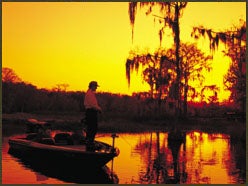 A wise fishing-tackle salesman once observed that there is nothing new under the sun with regard to fishing lures, just new ways of packaging and promoting them. With that in mind, it is interesting to note that Creme Lure Company recently reintroduced its rigged Scoundrel plastic worm. It is listed as “new” in Bass Pro Shop’s 2001 Master Catalog. Yet if you’re a baby boomer who started fishing when you were a kid, chances are the first plastic worm you ever cast was practically identical to this new Scoundrel.

Back in the late ’50s, before such terms as “tournament” and “Texas rig” entered the fishing lexicon, Nick Creme’s rigged Scoundrel with its monofilament harness became a popular lure. The original rig consisted of two snelled hooks imbedded in a natural-color worm. At the front was a silver, propeller-type spinner sandwiched between bright-orange glass beads. The hooks were covered by wire weedguards.

All you had to do was unwrap the Scoundrel rig, tie the looped end of the mono harness to your line, throw the worm out and wind it back. The rigging didn’t allow for much action in the worm except for a quivering tail. Weird as it looked, the contraption caught bassÃƒÂusually within a foot or two of the surface as it was being retrieved steadily back to shore or boat.

When tournament fishing came along and the Texas-rigged worm with its buried hook and bullet weight became de rigueur, the harnessed Scoundrel quickly dropped from favor. Structure fishermen wanted baits that could cover a lot of water in a hurry, especially the submerged cover along deep drop-offs and ledges where bass congregated in schools. Companies such as Mann’s, DeLong, Fliptail and Mister Twister obliged them, introducing new Texas-rig worm designs that were offered in a variety of shapes and sizes and often featured swimming tails that waggled enticingly.

Still, although the rigged Scoundrel fell from grace, the unrigged version did not. It won a place in the hearts of bass fishermen who usually fished shallow lakes and just wanted a plain-Jane plastic worm that looked exactly like the real thingÃƒÂdown to the egg sac and flattened tail. And at some point in the life of the 52-year-old Scoundrel, anglers in various parts of the country began to fish the worm with nothing but a hook attached to it. They discovered that bass foraging in the shallows relished a weightless plastic worm twitched through their neighborhood just under the water’s surface. Thus was born the “floating worm.”

Scoundrel was the original worm of choice for what has become a popular springtime fishing technique. Nowadays, the Scoundrel design has been replicated successfully by several companies, including Zoom, Gambler and Berkley Power Baits.

Regardless of the brand name, floating worms are effective in clear water when the water temperature reaches about 65 degrees and bass are: * Cruising the shoreline in clear water before the spawn; * Actively feeding where baitfish such as shad are present; * Staging in holding areas or ambush points such as beds of submerged aquatic vegetation, under wooden docks or in shallow cover.

Keep It Simple
Minimalists rig the unweighted worm Texas-style, with the barb of the hook (usually a 3/0 Southern Sproat or one of the newer wide-gap versions) buried in the body. An alternative is to use a weedless hook with the point exposed inside a wire weedguard. Either way, the hook is tied directly to the fishing line. Some anglers use a short leader with a barrel swivel connecting it to the fishing line to alleviate line twist (see sidebar, previous page). Perhaps the most popular retrieve is to impart a side-to-side, swishing motion in “walk-the-dog” fashion by alternately twitching the rod tip and turning the reel handle to take up slack. Michigan pro-angler Kim Stricker, who was introduced to worm fishing by way of the spiinner-rigged Creme Scoundrel in the ’60s, favors a retrieve cadence consisting of a series of twitches followed by pauses. “After I cast the worm out, I let it sink just out of sight and then twitch it three times until it’s back up near the surface,” says Stricker, who these days favors a floating worm made by Haw River Tackle (336-227-4673). “Then I let it drift down again. When the worm goes out of sight, I watch my line. If I see it jerk, I jerk back.”

An even slower retrieve is favored when a floating worm is fished over submerged treetops or thick weed beds. The worm is cast into the middle of the cover and then twitched provocatively for a few seconds before it is moved or it disappears into a swirling boil as a bass inhales it.

Color? No Concern
Medium/heavy rods are good matches for floating worms because they have enough “give” in the tip to cast relatively weightless bait. They also accommodate the twitch-and-reel retrieve without moving the worm too far, too fast. Lighter lines allow longer casts with floating worms, so 10- to 14-pound-test monofilament is ideal. An effective floating worm is not just any plastic wormÐit must have the proper stiffness to sashay from side to side or impart a subtle rippling effect. The original eight-inch Scoundrel established the standard, although round worms in shorter lengths will work if combined with the right rod and line. Choosing a good floating worm is not an exact science and is conditional on the tackle one uses and the retrieve.

Color doesn’t seem to matter much, except the brighter the better as far as many anglers are concerned. White is popular in the North; yellow or bubblegum pink is a Southern favoriteÃƒÂespecially in South Carolina, where the floating worm boom began.

Vivid shades are preferred not for the bass’s sake but for the angler’s: loud colors are easier for a fisherman to see from a distance. If the squirming worm suddenly vanishes from view as he is retrieving it, the angler sets the hook. Usually, that’s when things really get interesting, and the fisherman is thankful that Nick Creme developed the Scoundrel wormÃƒÂwith or without the harness and spinner.