Bass on the Move

Trolling is the quickest way to locate fish in all that water. 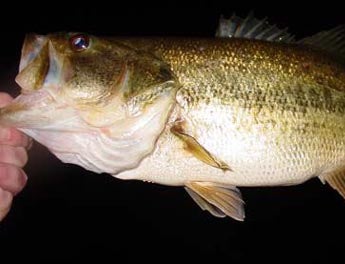 Sometimes you can beat the water along a shoreline to froth with your lures and still not catch bass. That’s because most bass, especially the bigger ones in a typical impoundment, migrate away from the shoreline after the spring spawn. By midsummer, most bass are chasing migrating baitfish around the lake and positioning themselves near points, channel ledges, sandbars and the like.

When bass take off for parts unknown, you have to go into the wide-open spaces to find them. Trolling will help make your search shorter.

Surefire Fish Finder
When I was a lad, trolling was a last-ditch tactic to try before heading for home without fish. Looking back, however, it occurs to me that such trolling episodes frequently resulted in bass larger than our usual average caught by casting. Sometimes we trolled to locate the best fishing areas in lakes we’d never fished before. We used lures that grubbed along the bottom when trolled slowly, which we accomplished either by drifting with the wind or using a small outboard engine. Besides catching an occasional fish, our lures transmitted information to us regarding the bottom composition-whether there were weeds, rocks, gravel, logs, brush, sand or mud down there.

Slow trolling also gave us an idea of water depth and structure such as drop-offs, creek channels, long points and midlake humps. If we had some sort of topographical map-such maps were rare back then-we could match what we detected with our fishing rigs against features shown on the map. A strike suggested a couple of things: first, the fish were at a certain depth at that spot; and second, the chances were good others might be at that depth at similar structures in the lake.

Trolling during daylight or after dark is still a great way to fill a livewell in the summer and also to learn what’s under the surface for future reference. Of course, nowadays you can learn all you want about a lake with a good sonar unit and it will take only days, rather than weeks. But you won’t have as much fun as you can by trolling, and if you don’t drop a line, you’re guaranteed to go home fishless.

Map Out a Strategy
If you expect to be a serious troller, start by getting some good topographical maps of the lake you fish regularly. Maps are especially handy for pinpointing stair-steps, drop-offs, declines and sheer shorelines. Once you learn the nature of the lake’s structure, you can select certain lures and boat speeds to cover each component efficiently. A GPS unit with built-in lake maps, or one that can use removable map cards, is a great tool for trollers.

The approach and the equipment you’ll need for trolling are fairly basic. A good trolling rod is 6½ to 7 feet long to provide good leverage in a fight, and it has a stout butt section for setting the hook on a long line. Whatever reel you have should be okay. I recommend using a 40-pound-test fused-braid line (which has a diameter similar to that of 10-pound-test monofilament). The stronger line will come in handy when you have to pull lures loose from snags, and the small diameter helps crankbaits achieve maximum depths. Lures must be selected to cover all depths, from top to bottom. Lipless crankbaits, spinnerbaits, swimming spoons and diving crankbaits are great for working stair-step shores. Just make sure you position them correctly relative to the bottom configuration. For example, put a minnowbait or lipless crankbait (which doesn’t dive but maintains a steady depth governed by your boat speed) on the shallow side of the boat. Try running a shallow-diving crankbait on the offshore side.

Medium-running crankbaits will have slightly longer lips than shallow runners and dive 4 to 8 feet deep. If the fish aren’t positioned in water less than 8 feet deep, it’s time to try the deep runners. These tend to weigh about ½ ounce and dive 15 to 20 feet.

When you’re trollinng crankbaits, it’s essential to make sure that they’re tuned properly, especially if you have more than a couple of lines out. Each type and size of lure you troll must be able to run at high retrieve speeds without veering to one side or turning over and twisting line.

To make sure a lure is tracking properly, suspend it about 5 feet off the rod tip and troll it beside the boat so you can observe its performance at various speeds. Begin at a crawl and slowly increase your speed to 15 mph, which is fast for trolling. Each lure should run on a true centerline. If one veers to the left, use longnose pliers and bend the line-tie slightly right until it runs on center; vice versa if the lure runs right.

[pagebreak] Start Shallow
Begin trolling along shallow shorelines and use lures that contact bottom intermittently. Cover each lake section thoroughly, beginning at the head, and concentrate on the areas whose cover, structure and depth should attract bass. If no bass are contacted here with lipless crankbaits or spoons, move out a bit deeper and try medium-depth crankbaits such as FlatFish or minnow divers.

Troll at different speeds for varied depths and actions. When a bass latches on, remember the depth at which it was holding. Keep a felt-tip marker handy, and right after you set the hook, mark the line in front of your reel. Then troll back over the same course, letting out line to the telltale mark to reach the same depth. If you get another strike, you’ve hit pay dirt.

If nothing is stirring offshore, here’s another tactic to try: Return to near the shoreline and use shallow runners that you can swim and wobble at top speed. Really race along close to shoreline cover. Other anglers might think you’re wacko, but high-speed trolling can trigger reflexive strikes when nothing else will turn on the bass.

Before you call it a day, try “wind trolling.” Tie on a 1-ounce jighead with a curlytail grub trailer. The unusually heavy head will hang suspended almost vertically below the boat and give you the best feel of pickups. Let the breeze drift you along. Unless it’s blowing a gale, the wind should keep the boat moving at just the right speed. As you drift along, keep the lure in contact with bottom features, where hefty bass lurk in ambush for prey swimming overhead.

Trolling isn’t brain surgery, but you do have to learn how to fish in the right place with the right lures. Give it a try. There’s one thing I can say about the canny trollers I know: They rarely go home skunked.

Getting a Lure Unstuck
If you troll lures with treble hooks, one thing is certain: You will hang up. That’s why it’s smart to carry a lure retriever in your boat. These devices cost less than $10 apiece and are available from tackle shops or mail-order outlets.

Another option is to equip your trolling lures with Ultimate LureSaver rings, used to connect treble hooks to a plug. A LureSaver is made of titanium, a metal known for its resiliency and “memory.” If LureSavers are used in place of O-rings, you can pull a lure free from a snag so that you only lose the treble hook and not the plug. Once the lure is free, the LureSaver returns to its original shape and you can put another treble hook on it.

The LureSaver is available in various strengths to match the line on your reel. (About $8-$11 per package of six; 866-587-3728; www.ultimateluresaver.com)