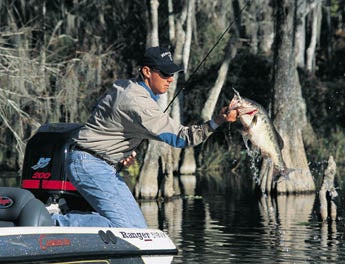 11. Spin the Color Wheel
Considering the hundreds of lure shades and color combinations they have to pick from, it’s no wonder bass fishermen have trouble choosing the right one. Texas pro Alton Jones simply selects a bait color to match the color of the bottom or weed cover he’s fishing.

“I realized that crayfish, like almost every other creature that lives on the bottom, tend to blend in with the bottom,” he explains. “If it’s a sandy, limestone lake, crayfish are going to be more brownish or light in color. In moss, they’re going to be a dark green. It makes sense that baits designed to imitate natural prey blend in, too. It doesn’t look right to bass if they stand out.”

12. Crank Up Those Backlashes
Nothing is more aggravating than a backlash in a bait-caster. But Florida pro Shaw Grigsby has a neat trick for quickly resolving a bird’s nest. Grigsby doesn’t attempt to pick it out. Instead, he tightens the reel drag to the maximum setting to lock the spool. Then, while applying firm pressure with his thumb on the tangled mess, he turns the reel handle several times. “This tightens the loops formed by the spool overrun and pulls the loose line in the right direction to reverse the backlash itself,” Grigsby says.

“Usually this frees up the line and removes enough loops on the spool so you can find the one or two key loops that are creating the whole problem. Then you can quickly pick out the backlash and resume fishing.”

13. Rely on the Drop Shot
Born in Japan, the drop-shot rig is deadly for vertical presentations against bass. It resembles an old- fashioned catfish setup, designed to keep a piece of cut bait floating enticingly a little off the bottom. The drop-shot rig positions a small soft-plastic lure in its prime location-a foot or more above the lake or river bottom. The hook is tied to the line with a Palomar knot; the end of the line is then looped back through the hook eye to peg it in place on the main line. A small bank sinker or one of the new specially designed weights goes on the bottom.

14. Keep Fluorocarbon Line Handy
More anglers are learning a trick flyfishermen have known for years: When it comes to detecting the faint strikes of light-biting bass, fluorocarbon line is the way to go. Keep at least one rod and reel rigged with fluorocarbon just in case bass don’t take your lure or soft-plastic aggressively. “You can immediately feel the difference between regular monofilament and fluorocarbon,” says California pro Aaron Martens. “Fluorocarbon has very low stretch and good sensitivity. It sinks faster than monofilament and braid, which is a good feature at times.”

15. Tune a Spinnerbait
No doubt you’ve heard that tuning crankbaits makes them run better. But spinnerbaits need tuning, too, especially after you’ve bounced them off logs or rocks a few times.

South Carolina pro Ray Sedgwick says it’s important to make sure the blade wire runs directly above the bait’s head; otherwise, the lure might spin or track off.

16. Supercharge a Buzzbait
Most people wouldn’t abuse a brand-new buzzbait the way O.T. Fears does. To improve the bait’s performance, the Oklahoma pro routinely uses pliers to cut the buzzbait wire in half about a half inch above the leadhead. Then, after twisting small loops in the ends of each wire, he reattaches the two pieces with a split ring. This lets the hook ride lower in the water and enhances its hooking ability.

** 17. Read Each Strike**
Florida guide Sam Aversa analyzes each strike in an attempt to figure out the disposition of bass. For instance, if a fish hits the lure and moves quickly from cover or down the bank, Aversa knows it’s likely there are more bass in that spot. The fish that took the lure is trying to get the “food” away from hhungry rivals.

Another scenario: If a bass inhales a lure but doesn’t move much, Aversa says it’s a sign that a big bass, or an inactive fish, took the bait. In either case, he responds by being more precise and more methodical in his fishing approaches.

Lake Fork guide Kelly Jordan uses a simple but effective method to peg a weight. He ties an overhand knot with a medium-sized rubber band, cinches it into position above the sinker and then clips the end. When he’s ready to remove the weight, Jordan clips the rubber band from his line.

20. Hone Your Hooks
Fishermen should never underestimate the importance of using the right hook, keeping it in top-notch shape and knowing when to change it.

“I check my hooks’ sharpness about every five minutes and am constantly sharpening them,” says three-time BASS Angler of the Year Kevin VanDam. “I see people who are still using the factory hooks, rusty hooks, bent hooks or hooks that just aren’t as sharp as they should be. Then they wonder why they keep missing fish.”