Use more motor power to put baits right in front of the fish. 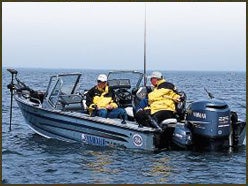 Ride along in one of Marty or Scott Glorvigen’s big Lund Pro-V boats and you’ll soon believe the thing possesses a life of its own. There are no weather or current-induced gyrations that frustrate fishing, no struggling for a heading in crosswind, no tail-wagging in following seas. The boat will hold course even in the most unstable conditions. It can squat like a toad and be perfectly aligned over a mother lode of walleyes, crab sideways to explore a tiny finger off a channel and then squirt back on course regardless of the wind. Naturally, the Glorvigens have some input here via ingenious motor placement and operation.

The twin brothers are multiple walleye tourney champs, Scott’s crowning win being the $300,000 Wal-Mart RCL event a couple of years back. Their boat-control system evolved because in walleye fishing they’re presenting the bait with the boat most of the time anyway. Professional walleye anglers are the nation’s pioneers in advanced trolling methods and motor rigs. Years ago they popularized the use of low-horsepower auxiliary gas “kicker” motors and single bow-mount electric “trolling” motors working individually and also simultaneously.

“You tell a bass angler you’re going to be running three motors and he’ll say you’re crazy,” says Marty Glorvigen. And that doesn’t include the main outboard. You need plenty of room-what the cognoscenti call “transom real estate”-to hang three motors on the boat’s butt (the big motor, a kicker outboard and a trolling motor) plus another electric on the bow. Rejoice, however, in the knowledge that many of the tricky maneuvers that follow can be replicated with fewer motors.

Principle of the Thing
The simplest (and least expensive) multi-propulsion system involves trolling frontward with a transom-mounted gas kicker and a bow- mounted electric. For their kicker the Glorvigens settled on Yamaha’s T8 four-stroke with a high-thrust prop for great heavy load performance. The little powerhouse has electric start and tilt (control on the tiller), a large shift lever and a friction throttle control. The latter two features are especially important, as you’ll learn. For precision tracking and instant course correction, Scott and Marty use various bow-mount Minn Kota electrics with the must-have AutoPilot (AP) feature. The internal AP compass locks on any set course, holding it in wind or chop. To correct or steer back to your heading you simply hit the momentary “On” switch. AP motors continually monitor heading, even when they’re not engaged. The gas kicker saves battery juice and provides headway in wind, but in calm conditions you could use only the bow electric.

Longtime readers will remember my love affair with AutoPilot following a mishap that left me attached to an active northern pike via treble hooks-one in the fish, the other buried in one of my fingers. Alone in the boat and needing my good free hand to keep the pike from thrashing, there was little I could do about steering. The wind was sending me toward a rocky headland. Fortunately the AP-equipped motor was deployed and I set a course to open water using the remote foot control, able to let the boat run along while I dealt with the pike.

Remote control for an AP-equipped bow-mount is vital for advanced trolling. Unlike in a typical casting situation where an angler runs a bow-mount electric from the forward casting platform, serious trollers position themselves at the transom to run their gas kicker and need the remote control for the electric bow motor back there.

For ultra-slow trolling, walleye anglers often resort to back-trolling. Boats designed with sharp-cornered transoms are best for back-trolling because they present the greatest resistance on the turns. That means lines swing slowly-good for fussy fish.

**Forget About Casting **
Two-motor trolling, whether backward or forward, is done along various bottom structures, weed lines, points and walls and over shoals and reefs. Once fish are located and marked on a depth finder or via shore marks, the Glorvigens add a “hovering dynamic” to the troll. Here the large-shift control on the Yamaha kicker shines because the gas motor is slipped in and out of gear continuously.

The technique causes the fishing lines to stall, rise and fall. It’s effective using jigs, spoons, drop-shot rigs or any of the varied slip-sinker rigs. The bow-mount electric is used to adjust boat attitude to the hot spot while hovering over it. It’s the boat that’s presenting the bait.

The third motor in the Glorvigens’ setup is a Minn Kota Vantage transom-mount electric. This automatic stow-and-deploy motor can be used instead of the kicker in less windy conditions, but its key use is in conjunction with the gas kicker.

In one typical application, for example, the bow electric is stowed and the Yamaha T8 supplies back-trolling power. With its jointed tiller and high-ratio steering (4:1) the Vantage provides instant directional control with just a small movement of the tiller arm. Here the back-troll involves exquisite levels of precision. Turns can be tight; the outside fishing line passing under the forward hull during the pivot never leaves the strike zone.

The Glorvigens’ most involved system employs the bow electric, the Vantage and the T8 kicker simultaneously. Using the throttle friction control, the operator sets the kicker at a speed adequate to hold the boat stationary. The Vantage steers the stern and, as the stern begins turning, the bow-mount electric keeps the boat’s front end aligned with the transom. Result: the entire boat crabs sideways. Alternately, the boat can be slid forward, stopped to hover and then slipped back over the sweet spot.

Think of how you could use such control to fish along bluffs, over a rocky plateau or along a reef. Right now is the season to do it.