The biggest smallmouths are vulnerable in pre-spawn. 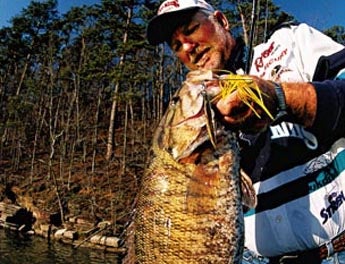 Roger and Big Todd (of the size 15 shoe) and Steve and Little Todd can tell you all about pre-spawn smallmouths, including the fact that right about now is prime time to catch the big ones. The tactics of this Tennessee angling quartet will help you catch early-season smallies wherever you are. Sure, some of the ways these guys handle their baits are, well, a little weird. But that’s all Roger Stegall’s fault; he started it.

DEEP-WATER PATTERN
Stegall fishes 175 days a year on the big river-lake called Pickwick, which straddles the Tennessee, Alabama and Mississippi borders. Stegall mainly spends his time in the moving water of the main lake-as does Big Todd Rasberry. The other dynamic duo of this team (Little Todd Witt and Steve Barnett) have developed tactical variations for fishing areas up major creeks where there is little current influence.

Stegall believes that big bass start shaking off the winter blahs when Pickwick’s water temperature reaches about 45 degrees. At about 50 degrees, mature smallmouths bunch up and move to pre-spawn staging areas. Let the water reach the low 50s to about 55 degrees and they’re truly chomping. So what kind of places does he fish? “The banks, for one,” he says slyly.

I take this to mean pounding the shoreline with lures. Thankfully, Rasberry is there to tell me more. “He’s not talking about ‘dry’ banks; he means the underwater banks.”

“In water ten to seventeen feet,” Stegall adds. “They’re really underwater bars, mainly formed by shore wash-outs. The best ones stretch out to the main channel or tributary. I lost my biggest bass-easily ten, maybe eleven pounds-where the river channel and a creek join at the tip of an arrowhead-shaped bar.”

Stegall graphed the spot with sonar. “There’s an Indian mound on it,” he says. “Big smallies school on it, often under schools of white bass. The smallmouths have easy pickings when the whites are feeding on shad.”

SPINNERBAIT STRUCTURE
Stegall also likes flats, ledges or bars coming from the main shore and washed by current so the water forms a back eddy. Such places are just like the productive back eddies in trout rivers. The trout analogy applies to another favorite structural variation; Stegall calls them “pushes.” These are current breaks, really, and can consist of high bottom spots on a bar or ledge with a scoured depression in front of them, or a rock pile or stump hit by current. Just like jumbo trout, big smallies will hold in the dead spot ahead of such a “push” waiting for food. “A largemouth won’t fight the current to get to such a place,” Stegall insists. “You’ll find it behind the current break, though. The pre-spawn, which is March here, is the best chance to catch big smallies. They spawn deeper-eight to ten feet-then slide back to twenty-plus feet and follow the shad around the rest of the time.”

The kinds of baits Stegall and his buddies use seem typical, though large by smallmouth standards. But it’s the way they use the lures that’s essential to success. Consider the Ã‚Â¾-ounce Strike King Premiere spinnerbait that Stegall modifies by cutting off the small Colorado blade to leave the No. 5 gold blade. He fishes it in water 6 to 20 feet deep. Once this big boomer reaches bottom it’s cranked a couple of times very slowly, then allowed to hit bottom again and again between each few turns of the reel handle. Once at the boat it’s allowed to fall again. Sometimes that’s when a bass grabs it.

SHALLOW JERKS
The Strike King Wild Shiner hard jerkbait is hot in shallower water over bars and in eddies. Stegall pulls it under the surface using his rod and arms to make it dart and wobble. After a pull, he reels line as he moves the rod back toward the bait. The lure pauses for a moment before Stegall pulls it again.

Chartreuse grubs or tubes with jigheads are Stegall’s favorite soft pllastics, and he fishes them in two different ways: 1) Once a grub has settled to the bottom, he slowly cranks it in with no twitches, hops or rod snaps; and 2) he casts a jighead grub or tube up-current of a push (the current break) and allows it to drift toward the holding spot. Stegall just bumps and drifts tubes. He cranks grubs a couple of turns, then “kills” them so they swing downward as they sink. Just before reaching the anticipated hot spot, he tightens the line so the grub rises.

Smallmouths up the feeder creeks follow the same patterns, but “they move over a much wider area, too,” says Todd Witt (known as Little Todd only in comparison to Big Todd). The bait, mainly shad, isn’t fighting the heavy current that might be present in the main lake, so “it moves around more,” says Steve Barnett, who, like Witt, guides for Pickwick smallies.

In the early pre-spawn, Barnett drags or pulls chartreuse tubes like the Strike King KVD, switching to green pumpkin smoke in clearer water. Smoke grubs are good almost any time. The underwater gravel bars, humps or rocky points he likes tend to be closer to the “dry banks” or true shoreline.

HARD AND SOFT PLASTIC
Todd Witt’s patterns are much the same, though he’ll fish creek areas where there’s a bit more current. He looks for pushes, too, but along banks and bars nearer shore. Though Witt will pull Wild Shiners when it’s cold, if an afternoon warms and the current dies, he’ll jerk the lures in the standard escape-mode manner. Where current is negligible, Witt uses Carolina and drop-shot rigs, especially at creek mouths and ledges near a fast break into deeper water.

Come to think of it, each of the Tennessee quartet has his own way of catching big smallies offshore, and they all work. Try pushes, washouts and underwater banks instead of hammering the main bank. You might connect with more of what old Billy Westmoreland accurately dubbed “those bodacious brown fish.”