For one afternoon a year the carp is king. 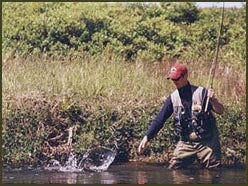 Carp are classically maligned bottom feeders whose very name negates any allusions to their being noble or revered. Their goldfish-on-steroids appearance denies them visual equality with such sleek gamefish as trout, bass, walleyes or pike. The Delorme Atlas and Gazetteer, the popular series of state topo maps, bypasses even listing carp as a gamefish in its Montana fishing index.

Of course, this may just be American chauvinism, because carp are highly sought after, both as fighters and as table fare, in much of Europe. Any sort of championship status would be nonexistent in America were it not for the “Big Lips World Cup Carp Tournament” held annually at Big Horn Lake in Montana. Although “World Cup” is a relative term here, guides and locals of the Big Horn River gather each July to take a mid-season break from the business of guiding trout anglers and go carpin’ on the fly.

“Carpin’ is a chance to burn the candle at both ends,” Big Horn guide and my tourney partner Eric Wilcox told me as we prepared our gear. “You swim and party with the guys you see every day across the river while you’re guiding other people, and you get to fish for fun instead of work.”

Nearly 15 years ago, local residents Hale Harris, Steve Hilbers and Brad Downey, tri-founders of the tourney, watched carp in Big Horn Lake feed on the surface much like a trout, and shortly after found them receptive to the fly. “The size, power and fight all made for an exciting way to fish,” says Harris, co-owner of the Big Horn Trout Shop. “A few years later, we put organization to it and called it the Big Lips tourney.”

Carp have big, thick lips that are attached to a body usually weighing five or six pounds, but which can reach 20 pounds. They’re good sport, and that was one of the recreational hopes for the Yellowtail Dam impoundment waters when construction began in 1965 to block the Big Horn River between the brilliantly red, orange and yellow “Madison limestone” and “Big Horn dolomite” cliff walls of the Big Horn Canyon.

The tournament starts at noon and ends at 6 p.m., afternoon and evening having the best light for spotting rising fish. The rules are easy: no motors, flies only and no chumming. Each two-person team is required to keep all entries in a live well. Judges visit each team to count the number of fish, inspect body size and weight and, above all else, measure the lips.

Flyfishing for carp on a lake is more like hunting, which may be why it is so appealing to a bunch of leathery trout guides. We set out slowly. Eric is paddling and I’m standing in the bow, hunting for a visible “tuber”-a rising carp-along the cliffy shore. We each scan 10 to 100 feet out, watching intensely for our maligned quarry.

When the first sighting occurs, I yell, “Tuber, 10 o’clock, 40 yards!” Eric brings us within range, cautious of his strokes, which can easily spook the wary fish. The rise is now almost at 12 o’clock near the cliff, and I cast. Eric ties on a big, visible hopper with heavy leader and tippet. Hoppers and unique attractors-like an oversized parachute fly that looks like a cottonwood seed-are by consensus the best flies for rising carp.

Eric points out that the most accessible fish will have some continuity to their feeding, heading in a specific, discernible direction, or maybe even hovering side to side, bobbing like small dirigibles trying to make headway in the face of an incoming weather front. This requires precision casting based on split-second observation of where to place the fly. Mine lands right behind the boil but the carp is not interested. What turned out to be our one opportunity is gone.

The day before, during solid activity, Eric’s casting connected him with a number of fish that fought into his backing; his fish-playing ability brought him several big lips. Today, tourney day, is a different story-few sightingss and no big lips brought to hand. Intensity for the hunt wanes and Eric will be passed by for awards such as Largest Carp (71/2 pounds) and Most Fish (20).

But the camaraderie of the Big Lips World Cup makes up for a tuber-less finish. And Eric astutely identifies the scoffed-at carp’s most unique attribute when he says that the bottom feeders “are funner than hell to catch.”