Key on brush piles before and after the spawn and fish them with vertical presentations to avoid hang-ups. 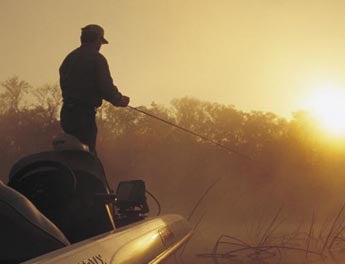 Spring: Neither Gibson nor Lindsey relies on brush piles during the spawn, mainly because only pre-spawn or post-spawn fish suspend above or in them. In some lakes, the hard sandy bottoms and depths that crappies favor for spawning might be free of aquatic vegetation.

Instead, spawners gravitate to “living brush piles” such as buck brush, crooked brush and flooded willows and reeds growing in the shallows. Fish vertically in this cover with live minnows, tiny tubes or small hair-tail or curlytail jigs.

Post-spawn: Some crappies move to brush piles near creek channel drop-offs. Gibson jigs these areas vertically with a 1/16-ounce jig. He enhances the lure by tipping it with a minnow or Berkley Crappie Nibble and holds it near the cover with minimal movement. “There are times when the crappies want the jig sitting practically dead still,” he says.

Summer: Crappies favor cooler water, if the dissolved oxygen content is tolerable, and they will migrate offshore to find their comfort level as the weather warms. Strategically placed brush piles on drop-offs and ledges produce crappies for Gibson throughout the summer.

The Patoka Lake guide also probes deep brush piles with his jigging tactics in July and August. “Some of the creek channels on this lake have springs, and that’s where you can find the fish deeper,” says Gibson.

Autumn/Winter: Shallow brush produces throughout the fall as long as the cover holds baitfish. When shad move deep on the Red River during winter, Lindsey starts visiting sunken brush piles. Crappies will suspend above the brush at depths of 18 to 21 feet; Lindsey slow-trolls over the brush tops with plastic tube jigs tipped with minnows.

The same tactics work in Midwestern lakes, although cold winter weather is often the limiting factor for anglers such as Gibson.