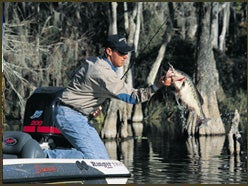 he test of any serious bass angler is to catch a lunker of more than 10 pounds. It’s a test relatively few fishermen actually pass. Then there’s Dennis Rahn, who at last count had 939 bass over 10 pounds to his credit and who hopes to top 1,000 in the next couple of years. No doubt he’ll add a few more to his tally this spring.

Mind you, Rahn didn’t actually land all of those bass himself, although he probably could have. He’s a Florida bass-fishing guide, and his knowledge of where to look for the fish and how to approach them has made hundreds of clients happy they booked him. He fishes with live shiners, a favorite food of bass. But even though Rahn uses live bait, there are no guarantees. Knowing how and where to position shiners near aggressive lunker bass is the real trick to catching big fish.

THE SIGHTING TACTIC
I first met Rahn several years ago after a Missouri buddy, Buck Rogers, phoned me and expressed a burning desire to join the 10-pound-plus club.

I told him I would scout around for likely fishing holes and guides in central Florida, which is prime big-bass country. The more people I talked to, the more times Rahn’s name came up as a big-bass guide.

After getting the okay from Rogers, I booked Rahn for a day in February. We got down to business as soon as we left the dock. First we motored around the lake, stopping occasionally in places that Rahn knew were bedding areas. He wore polarized glasses and studied each bed carefully from several yards away before making an appraisal of the lunker that was on it and whether she might be caught. Rahn proved his mastery of bass on that trip. Not only did Buck catch his first 10-pound-plus largemouth, but he caught two in one day. His biggest weighed 11½ pounds; the other topped 10½ pounds. Both were released and Rogers went home with keeper memories.

READING THE FISH
Through years of practical fishing experience, Rahn has learned how to read a female lunker bass’s mood and whether she is likely to bite. “If the bass is a light-green color, she hasn’t been there long and probably is still in the courting phase. She might not be aggressive,” Rahn says. “If she is really dark and aggressive-making big swirls as she chases bluegills around-she can be caught. When she’s laid her eggs and is just kind of hanging around with the male for a day or two and doesn’t appear to be too aggressive, she’s going to be tougher to catch. “It’s like the pre-rut, rut and post-rut with deer,” adds Rahn, who is a fervent bowhunter, “except here it’s the female bass that you’re trying to locate in the most vulnerable phase.”

POSITIONING THE BAIT
Rahn fishes shiners, but he doesn’t just hook them and cast them out into the bed. Instead, he anchors well upwind of the lunker’s lair. Rahn has the angler feed out anchor line slowly from the stern until the boat drifts close enough for Rahn to place the hooked shiner in position. Then Rahn has the angler pull the boat away from the bed with the anchor rope until they are a few dozen feet away. It’s a waiting game after that. The female might return to the bed soon or she might move in slowly and inhale the shiner with a flare of her gills.

“This is the system that has worked best for me over the years,” says Rahn. “I use a big bobber to keep track of the shiner, and the shiner might be four to eight inches long. I also want the bobber to provide some drag so the shiner can’t get far away and into the weeds. This rig makes a big splash when you cast it, and the bass scoots away. So instead, I slip in, drop the shiner straight down and then get out of there. The female might move off a few feet but she’s not going far for long.”

Rahn catches his own shiners with a cast net, but shiners of all sizes are readily available at most bait stores in central Florida. Rahn likes lively shiners that will move aroound once they are released into the water. If they aren’t moving around the bed enough to suit him, he might give the line a pull to motivate the minnows into action.

Rahn’s standard big-bass outfit is a fiberglass bait-casting rod with a stout butt and sensitive tip, matched with an Abu Garcia Ambassadeur 6500 loaded with 30-pound-test monofilament. An Eagle Claw wide-gap No. 84 (5/0 ring-eyed offset) hook goes on the end.

Anglers who have never fished with live bait tend to think of it as giving unfair advantage to the fisherman. Give it a try before you decide. I think you’ll discover that 10-pounders are never pushovers, no matter what the bait. Dennis Rahn has convinced me that there is a real science to catching big bass consistently.