Catch Me If You Can

Anglers battle airborne fish by the hundreds in Illinois tournament. 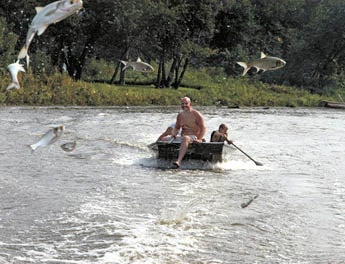 Despite Tom Matych’s best efforts, his boat came in only second at the Redneck Fishing Tournament along the Illinois River near the town of Bath. Matych’s fishing “tackle” was a 4-foot length of two-by-two lumber. The prey? Silver or jumping carp, an alien species from Asia.

“It was the wildest two hours of my life!” Matych says. “I was whoppin’ ’em with the stick, knocking ’em out of the air as they jumped over the side of the boat.”

Organizer Betty DeFord says the tournament’s 38 boats netted (or, as in Matych’s case, whopped) 1,263 silver carp in two hours. The winner, with 202 fish, collected a $340 purse. The fish were then given away as food.

Heads Up
Behind the fun is a real problem. The invasive carp, escapees from Southern fish farms that made their way up the Mississippi River, are being blamed for declines in native fish. That’s quite possible, says Steve Shults of the Illinois Department of Natural Resources.

To people like DeFord, the jumping fish have ruined more than just the fishing. Silver carp jump as high as 8 feet in the air at the sound of approaching boat engines and frequently smack people upside the head. “This year has been so bad,” DeFord says, “you can’t even take a simple boat ride without getting slimed by those carp!”