Up your strikes by knowing how fish relate to structure and cover when currents are flowing. 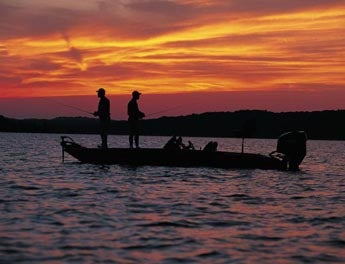 Location might be everything in real estate, but in fishing, it’s not the last word. Even if you’ve found the mother of all honey holes, it takes proper positioning to make your presentation work. And getting in the right position means considering current, water level, weather, time of day, season, available forage and human activity. But here we’ll concentrate on current.

GOING WITH THE FLOW
Power generation, drawdowns, spring runoff, wind-all produce currents, which vary in intensity. Fish respond to current by positioning around cover or along bottom contours. Generally, they face into the current because they expect forage to come from that direction. Regardless of the source of the current, then, the cardinal rule is to fish your bait, whether it’s a natural bait or a lure, so that it moves naturally in the flow. Of course, there are exceptions to deal with, such as eddies or cross-current winds.

When the wind is really ripping and piling up waves along a shoreline, for example, fish don’t seem as concerned about which way the current is running as they are that the wind is producing a smorgasbord. Depending on where the wind stacks up the forage, fish might feed with the current or perpendicular to it.

SWAPPING ENDS
Current can do funny things. Anything that breaks a strong current flow, especially near a bank, will likely set up a reverse eddy. The water will move in the opposite direction of the main flow. If you can hold the boat upstream of the eddy in the main flow, cast down and in toward the eddy seam, where the reverse current will pull your bait in the correct direction. If you must go downstream of the object causing the current break, finesse your bait in on controlled slack. Don’t cast far up into the eddy and crank it out.

GETTING THE DRIFT
One of the simplest presentations used by crappie anglers is to let a boat drift sideways in the wind across open water with a number of rods spaced along the side. A sea anchor is sometimes used to slow the drift. The technique works a lot of the time, but when fish are fussy or hugging bottom rather than suspended, the sideways position isn’t best. In a freshening breeze it causes the boat to roll, making baits that you want to slip along slowly and steadily track in a herky-jerky fashion. That might be acceptable to active fish that aren’t picky, but not to indifferent bottom pouters. Instead, rig rods around the transom and make a controlled, bow-first drift using an electric motor. In heavier wind, deploy a drift sock at the bow, rig rods forward and drift backward.

[pagebreak] BUMPS ON THE BOTTOM
Casual anglers typically position off the end of a point and cast at it without considering much about what’s under the water. The best fish-holding spots might be on one side or the other, or even at the turn where the point and shoreline meet. One side of a point might drop off quite steeply; there might be rock piles, weeds, stumps or other attractions on one side or the other or at the inside turn at the bank junction.

Position your boat so that the current will take you along the point from shallow to deep or vice versa, or across its end, where all the fish-holding cover is. Cast up-current. Use the electric motor to maintain precise position if lake current is fighting wind current.

Humps or submerged islands aren’t connected to the main shore. Fish use them later in the season because they’re magnets for open-water forage. The shallower areas of these structures receive the most pressure, and fish there are spookier because of it. Work these high spots very early in the day and again at dusk or night, taking water movement into account. Work all sides of a hump until you find the magic spot. As with points, those sweet spots will often change with the season, current, water level and light penetration. Humps might be complex iin contour, with dips and rises along their length. Fish often lie in such dips or suspend above them.

A MIXED BAG OF STRUCTURE
When fishing a lake’s old river channel, stay out in the deeper water so you can fish a bait to walk over the channel edge, then fall at the drop-off. You’ll cover more water with each presentation if you’re positioned to make an angled cast that brings your bait back nearly parallel to the channel. With submerged, narrower creekbeds, you’re not likely to be able to maintain position entirely over the deeper slot.

In such cases it’s best to tack across the drop-off, casting so that you’ll work both the shallower areas and slightly deeper ditch. Fish will relate to sharp bends or any objects that break the monotony of the bottom landscape and the current funneled along the ditch or sweeping the flat above it.

[pagebreak] CURRENT CRUNCHERS
Bridge supports block, change and funnel current, which is why fish like to get behind them. The goal here is to cast into the places where current is concentrated. Bring back the bait down-current close along the piling. Work all sides. The front edges of supports often accumulate cover in the form of brush, tree branches and other debris that can hold fish. If the banks spanned by the bridge are riprapped, fish along them. Concentrate on unique features such as rubble that extends farther out, an extra large boulder or a “mini point.”