Sometimes you have to be underhanded to catch a bass 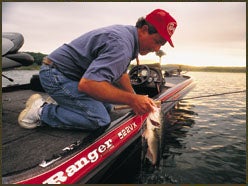 Boat docks can be frustrating. They ring the shoreline of your favorite lake, in plain view, probably harboring big bass in the deep shadows beneath them. Yet there isn’t a lot you can do about it, given the casting limitations that are presented.

When you try to lob an overhand cast into the nooks and crannies underneath such docks, your lure winds up on top instead, or your line wraps around pilings and drapes over cross beams. If you’re lucky you ricochet a jig off a piling and it lands with a splat several feet from where you want it to. More likely, the plug splashes down a couple of feet in front of the dock. Then, muttering to yourself that there aren’t any bass under the dock anyway, you move on.

Gerald Swindle, on the other hand, is a happy man when he happens upon a row of docks. As a kid growing up in Warrior, Ala., Swindle doesn’t remember a time when he didn’t fish these man-made fish havens. And the casting skills he developed to pick docks apart have served him well in the intervening years. Today, at 30, Swindle is one of the top young pros of the BASSMASTER and FLW tournament trails. Here are some of the things he has learned about docks and how to fish them.

** The Shady Side of Bass **
Bass position themselves under a dock for various reasons. Maybe it’s a good place for them to ambush small bluegills and minnows. Perhaps there’s a drop-off near the end and bass are attracted to a bottom that transitions quickly into shallower depths. More important, however, bass know it’s a good place to hide. Any brush or aquatic vegetation under the dock provides shelter. And shade is good cover for bass because visibility under the water is reduced — they don’t disappear, but they do become less conspicuous.

Depending on the time of the year, the best docks are those near deep water that contains other cover. In spring, docks near the backs of coves where bass spawn may be more productive. In summer, depending on the availability of food such as shad, bass may suspend under docks along banks closest to river channels.

The biggest obstacle to fishing a suspended dock is obvious: If there’s only a foot or two between the bottom of the dock and the water’s surface, it would seem impossible to cast a lure 15 or 20 feet into that space. Well, maybe for you and me, but not for Swindle. He honed his dock-fishing techniques in northern Alabama on Lewis Smith Lake and perfected a low-sidearm cast that allows him to lob a lure far under a dock. It’s a technique that any angler can learn but few fishermen master, mainly because it requires lots of practice.

Before he casts, Swindle positions his boat so he can fish the outside edges of the dock where brushy cover might be submerged. Then he starts firing casts under the dock with his bait-casting outfit. Swindle first lets about two feet of line hang down below the rod tip. While holding the rod low to the side and positioning the tip at about 6 o’clock, he then rolls his wrist clockwise to gain momentum. When the rod tip comes back around to 6 o’clock and is parallel to the water, he takes his thumb off the reel spool. The lure usually lands just under the outside edge of the dock and then skips along the surface until it loses momentum and settles into the water.

“If you let go of the line too soon (at 4 o’clock) the lure is going to dig into the water,” says Swindle. “If you let it go too late (at 8 o’clock) it’s going to go high. You’re not skipping the lure forcefully across the water so much as just slipping it across the surface.”
** Hitting Hard Targets **
Although Swindle uses bait-casting tackle, fishing docks with spinning tackle seems to make more sense. You don’t have to worry about a backlash with spinning tackle when you skip a light lure under a dock. However, Swindle employs bait-casters because his targets are big largemouths. With bait-casting gear, he can use heavier monofilament and apply more leverage to extract bigger fish from under a dock before they break the line or saw it off against pilings.

His delivery system is a Quantum reel (E600Ti) with a 6.3:1 retrieval ratio and a 61/2-foot, medium-action CastAway graphite rod (WRM66), which features a medium-action tip. Line choice ranges from 15- to 20-pound-test. His favorite dock-fishing lures are buzzbaits, floating worms, soft jerkbaits and jigs with plastic trailers. Such lures are more aerodynamic than bulky crankbaits. They also skip better.

The medium-tip rod is critical. It has enough give to let a plug take line out in uneven surges as it hits the water and then caroms, yet it doesn’t cause the reel to backlash — at least not too badly.