Like income tax returns, thermoclines confuse most bass fishermen--they understand the basic premise but not how these summertime phenomena interface with their efforts. 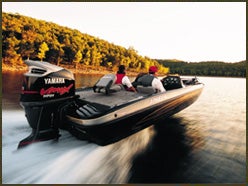 While they’re waiting in line to weigh their bass, professional tournament fishermen tend to chat like folks queued up at a grocery store checkout. Of course, the subject of the pros’ small talk usually involves the fish they caught, or the ones that got away. So it was a few years ago when Gary Klein of Texas and Ken Cook of Oklahoma were awaiting their call to the scales at a summer tournament on Bull Shoals Lake astride the Arkansas-Missouri border.

Klein told Cook he had caught his limit of bass in 40 feet of water by doodling a small worm in their midst. “Doodling” is a method of vertical jigging with a bullet-shaped leadhead jig. Klein didn’t know why the bass were where they were. All he knew was that he had found fish and he could catch them.

Cook understood the secret of Klein’s successÃƒÂthe Texas angler had found a place to fish where several important factors converged to create a bass way station on that hot, muggy day. The key to his pattern was locating a thermocline that intersected with cover in the form of flooded trees and structure in the form of a point that tapered down into much deeper water.

Cook, a former Oklahoma fisheries biologist, had his own thermocline pattern going on in that tournament with a Carolina rig. He was fishing a deep point, too. Klein won the competition and Cook finished sixth.

A Summer Place
Like income tax returns, thermoclines confuse most bass fishermen–they understand the basic premise but not how these summertime phenomena interface with their efforts. A thermocline is a band of water in a lake where the temperature at the top of the strip begins to drop rapidly (about one degree per foot) and where the water at the bottom of the band is slightly warmer than the colder layer on which it floats. Below the thermocline is the hypolimnion, an area where dissolved oxygen at the lowest depths is inadequate for the survival of most fish. Above the thermocline is the epilimnion, an area of warmer water saturated by light. A shallow lake, like most in Florida, has no appreciable thermocline because there is very little difference between the temperature on top and the temperature on bottom. Thermoclines usually form at depths between 20 and 50 feet, depending on water clarity.

Mainly, the formation of a thermocline is governed by light penetration and warmth. Imagine that light penetrates to 35 feet in a clear, deep lake. And perhaps, because the lake is in the lower Midwest and has a larger window of sunshine and warm weather, the water temperature at the 30-foot depth eventually reaches 65 degrees during the dog days of summer. As sunlight dissipates in deeper water, temperatures there drop dramatically, creating a thermal barrier where the light dims between the colder layer below and the warmer water above. Still water is another important ingredientÃƒÂfreshwater thermoclines don’t develop in rivers with strong current or tidal movements.

Easy To Find
Light penetration and temperature in a thermocline combine to provide a comfortable environment for plankton growth. Shad and minnows feed on the microscopic animals and plants thriving in the thermocline as well as on dead plankton that floats downward to the bottom of the epilimnion. Some baitfish may range along weedy banks and points at night and venture to the surface over deep water in low-light conditions, but the thermocline is their air conditioner and cafeteria in the hottest part of summer. This concentration of forage attracts bass.

Plankton can be packed so densely in a thermocline that the layer becomes visible as a shaded band on a paper graph or good LCR (liquid crystal readout) depth finder. Cook uses a Bottom Line NCC 5300. If a band isn’t apparent on the screen, but baitfish and larger fish are indicated at a fairly uniform depth, a thermocline is in the neighborhood.

Take it Slow
After locating one of these thermal refuges, the next step is to find an area where the thermocline interacts with other bass-friendly features such as cover or structure. Sometimes it’s possible to look at a lake’s topographic map and make good judgments about where to find bass based on what you already know about the location and depth of the thermocline, which may run for miles. Drop-offs or descending points with wood cover nearby are ideal, as are bridge pilings on which algae is growing.

“Obviously, when you’re fishing a thermocline that is at least 20 feet under your boat, you’ve got to use lures that are appropriate for that depth,” notes Cook, who won the BASS Masters Classic in 1991. “I start with a Berkley Power Grub (watermelon is a favorite color) on a jig head. If there is some structure associated with the thermocline, I may use a Carolina rig with a one-ounce sinker and a Berkley Power Hawg.”

Cook also employs heavy jigs or one-ounce spinnerbaits (shad-colored) with small blades that allow the lure to drop faster. A jig or Carolina rig attracts subtle bites when bass are not aggressive; spinnerbaits elicit reaction strikes when slow-rolled or yo-yoed back to the boat. Deep-diving crankbaits might work well for bass suspended in or near a thermocline. The trick with crankbaits is to make long casts with long rods that allow the bait to achieve maximum depth and then to keep the bait in the thermal band for as long as possible The drop-shot rig is the best new bait for mining thermoclines in lakes with smallmouths and spotted bass. Consisting of two or more baits (usually small, soft plastics) attached to the fishing line above a bottom sinker, the rig can be lowered to the proper depth and then jiggled enticingly.