Tips for taking your kids fishing and the best family vacations. 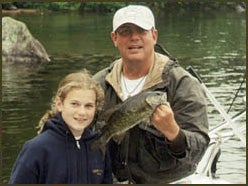 Do’s & Don’ts
This information is based in part on the advice of Hooked on Fishing International, an organization that has helped to introduce more than 6 million youngsters and their families to fishing.

1. Fit the tackle to the child.
Don’t give the child a rod and reel that is too large for his or her hands and too heavy to handle properly. Fish for sunfish or other panfish that are relatively easy to locate. At first, the object is to catch fish, not to catch big fish.

2. Use small, easy-to-handle baits.
Small baits such as bits of worm or PowerBait most probably will catch small fish, but that’s okay. Kids crave action, and meat on the end of the hook is the shortest route to a hook-up.

3. Don’t forget the camera.
Moments such as a child holding up his or her first fish are priceless and irreplaceable. Have a camera and an extra roll (or two) of film to preserve the memory.

4. Give young anglers a treat.
Take along a good supply of snacks and water or soft drinks. Carry favorite treats that the child associates with a good time. Take some wet wipes to clean up fish-slimed fingers and hands before and after snacks.

5. Hold back the bugs.
Insect repellent is almost as important as sunscreen. Nothing can ruin a trip faster for a child, and you, than an unchecked swarm of biting insects.

6. Make sure safety comes first.
State laws require that a child fishing in a boat wear a life jacket. It’s also a good idea even when the youngster is fishing along the banks of a stream or pond. Use a non-bulky life preserver. It increases the child’s comfort and mobility, which will make for a better day on the water.

7. Don’t forget the sunscreen.
Apply a good sunscreen to the youngster’s exposed areas before you leave home. Young skin is more susceptible to burning, and the long-term risks of overexposure are well documented. Reapply sunscreen frequently, especially if the child goes for a swim.

8. Don’t exceed a child’s limits.
A young angler will let you know when enough is enough. Don’t overdo it. If anything, it’s better to quit before the alarm bells ring. Also, plan on fishing at the most comfortable time of day, usually in the morning.

9. Give plenty of assistance.
There is no need to force a youngster to bait the hook or unhook and handle fish. If he or she is willing, terrific. If not, don’t push it. Be ready to help the child by supporting his or her rod or cranking the reel handle if the fish is putting up too much fight.

10. Be prepared for boo-boos. **
It’s always a good idea to pack a small first-aid kit. The magical powers (to a four-year-old) of a Band-Aid can be a lifesaver should the spines of a feisty catfish scratch your child. [pagebreak] **Great Family Vacations
Nothing will bore the socks off a young, would-be angler faster than a fishing vacation that is all about the fishing. No matter how into the sport your child claims to be, consider destinations that offer plenty of alternatives to angling. Shopping, amusement parks and other attractions will go a long way toward making the experience one that every family member will enjoy.

When the urge to cast a line does present itself, you’ll want to be someplace where the fishing is good, meaning a location where it is easy to catch large numbers of fish, regardless of their size. Unless the child you’re fishing with is a young adult, avoid the temptation to rough it. Creature comforts are probably your best ally in convincing a neophyte that fishing is a sane, reasonable and enjoyable way to spend time outdoors. Here are three destinations that fill the bill.

** Disney World (Orlando, Fla.)**
There’s just about nothing Disney World lacks to keep kids grinning from reveille to lights-out, and that includes some wonderful bass and panfish angling. A cadre of friendly, experienced guides operates comfortable pontoon boats at a number of carefully managed lakes on Disney’s property. You can book two-hour excursions for up to five people for about $120-it’s a great introduction to angling. The fish, which seem to know they’ll get thrown back, practically queue up for the privilege of playing tug-of-war. On a recent trip my guide told me he went five years before getting skunked-and it was the only time it ever happened, he said. (407-934-7639; www.disney.com)

Temple Bay Lodge (Eagle Lake, Ontario)
Your kids may not believe you when you tell them that a place as rugged-sounding as “Eagle Lake,” way up there north of the border somewhere, is as comfortable as the family-room couch. But you wouldn’t be lying.

“It’s the Marriott Resort of fishing lodges,” says John Mazurkiewicz, who handles communications for Shimano and G. Loomis. “They have great meals and it’s very relaxing and comfortable, so you see a lot of families up there. You’re not roughing it at all.”

Another advantage to Eagle Lake is that it’s accessible by car, so you might not have to spend a pile of money on airfare. Better yet, Eagle Lake operates buses out of many major Midwestern cities (Chicago, Milwaukee, Madison, Wisc., and Minneapolis/St. Paul, among others), so you can leave the driving to someone else.

Once you arrive, superb angling awaits. Smallmouth bass, muskies, pike and walleyes are the predominant game fish. Book a guide for the first day to learn the ropes; after that, you and your family will be ready to catch fish on your own. (800-369-3474; www.templebay.com)

** Eldred Preserve (Eldred, N.Y.)**
Tucked away in the Catskills, just 90 miles from New York City, Eldred Preserve has a slew of fun activities for everyone in the family. The resort ponds are stocked with trout, catfish and bass. Depending on your mood, you can haul up a trout for dinner (the preserve has catch-and-keep fishing) or tussle with an ornery channel cat, some of which tip the scales at 10 pounds. Non-angling diversions include canoeing, swimming and hiking. Horse lovers in particular will be smitten with the “Trout and Trot” package. Spend day one going after the ‘bows, browns and brookies that the preserve stocks, and after a good night’s sleep you can ride through the wooded trails that crisscross the area. (800-557-3474; www. eldredpreserveresort.com)