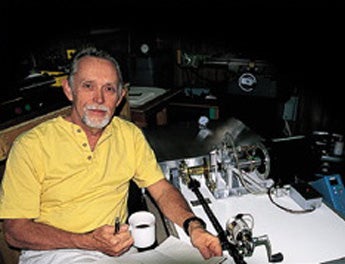 Most anglers have a kind of muscle memory for setting reel drag: hand-tighten the drag control, then yank off line by “feel.” Inexact as this may be, for some fishing it works-if reels, rods, line and average size of fish remain constant. In other circles, a reel drag is viewed as a sort of mechanical appendix: basically functionless unless it gives you trouble. As B.A.S.S. Classic champ Bobby Murray puts it, “I know a bass fisherman who said he’d had line pulled from his reel by a fish back in ’98. Afterward he said he took some pliers and fixed that!”

Bruce Holt of the G. Loomis company is more moderate. Except when fishing near heavy cover, he’ll tighten the drag of his Shimano Chronarch to just shy of where you could ratchet it down another half-turn. “A five-pound bass can still pull line off that way,” he says, but he warns that every reel is different. I’ll say.

The truth is that although overall quality of reel design and construction have markedly improved over past years, drag design and function can be like a trip into the Twilight Zone: Who knows what awaits. The soaring popularity of bass fishing, for example, led many manufacturers to build reels with drags that quickly reach their maximum with little turning of the control knob or star.

Some makers then employed the same design on other reel models and types for totally different fishing-not good. In an ongoing program to bring you some insight into this free-wheeling arena, Outdoor Life teamed up with systems design expert Skip Halterman (see sidebar, next page) to create protocols and a wickedly versatile instrument for testing reel drags. The drag machine, affectionately dubbed “Dragenstein,” has not only provided results on specific reels but produced a series of need-to-know insights into reel design and external factors that affect drag performance. We’ll have more about the Dragenstein and what it has to say about the 2003 crop of reels in our 2003 Tackle Test feature (April).

In the meantime, here are some facts about drags that Halterman’s testing has revealed or reinforced. One Size Doesn’t Fit All: There is no perfect all-around drag. Different drag tensioning systems, washer sizes, materials and surfaces are needed for specific types of fishing and fish.

Bad Angles: Acute line angles from reel spools magnify pulsing problems of poorer drags. Large spinning-reel line rollers located close to the spool cause sharper angles that become extreme as the spool oscillates and line comes off at either end of the spool. Levelwinds that follow outgoing line against drag help to reduce pulsing. More flexible rods also magnify pulsing in a drag of lower quality.

Quick Mistakes: Drags that increase quickly in response to adjustment may please bass anglers who fish heavy cover but aren’t good for fishing salt water or for fishing open water for walleyes, trout and salmon with lighter tackle. Unfortunately, some makers use the same quick lock-down drag design and materials in all models.

Lighten Up: Using a lighter or heavier spring beneath the spool cap in spinning reels can alter response to tightening the control (drag adjustment curve). Lighter springs produce more gradual drag force increases. The next step is fine-tuning washer materials. Salmon and steelhead anglers who fish relatively light lines on reels designed for bass customize reel drags by removing washers from the drag stack. They might even replace factory washers with aftermarket washers, and there are some good ones (call 888-206-4656; or go to www.smoothdrag.com).

Hold the Grease: A drag that relies primarily on heavy greasing to function is not reliable. Lubrication consistency will change as the reel heats under powerful fish runs, and the drag will fade. Light lube or dry systems are best. Drag materials and design are important even at lock-down settings. When usiing heavy line and a drag set to maximum, for instance, a powerful short run and surge by a seven-pound bass can strip the cheap, soft washers used in some drags.

Stacked Washers: Many drags of stacked-washer design (commonly used in spinning reels) don’t function as intended. Stacked-washer systems are intended to provide more drag surface using smaller washer diameter with washers placed within the confines of the spool. At light drag settings, sometimes the stacked drag isn’t even functioning. Instead it’s the tiny support washer or washers on which the spool sits that provide initial resistance. As the drag knob is tightened, the stacked hard and soft washers come into play in sequence. Not only does that lead to uneven washer wear, but it means you’re basically getting the effect of a partial system until reaching maximum setting.

**What a Jerk: **An ultra-smooth drag gives you far better odds for landing lightly hooked fish. Nowhere is this more evident than at heavier drag settings. What we’re dealing with here is start-up drag, or “stickshun,” as one reel engineer calls it. The force required to overcome friction and start a drag slipping is greater than the force needed to continue that slippage. Heavily set inferior drags have high stickshun. Their jerky performance is often enough to help pull out a lightly clinging hook from a fish’s mouth-or pop your fishing line.

Line Matters: The type of line and how it is spooled affects drag performance. Example: Uneven spooling, caused either by an oscillation system that produces line ridges on the spool or by uneven pressure applied during spooling up line, can make the drag bind. There is a great difference not only between “superlines” and monofilaments, but also between monofilament types, such as stretchy and low-stretch formulations. Extreme elongation can produce periodic drag seizure and release, which might be disastrous when you’re fighting a trophy fish.

Heat Hurts: Heat buildup from long fish runs will negatively affect poorly designed drags during a fight or when you’re trying to reset the drag.