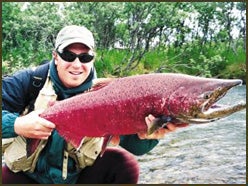 Pike Paradise
John Jensen, of Frazee, Minn., landed this northern pike on a lure he made himself. The 25-pounder was pulled from Recluse Lake on the Little Churchill River in northeastern Manitoba. The fishing trip was absolutely perfect, says John… except for the blackflies.

Making Up for Lost Time
Due to the forest fires of 2000, Kade Henderson (right), of Butte, Mont., didn’t get to go fishing once that summer, so he was keen to get his casts in this past season. This rainbow is just one of over 150 fish the eight-year-old caught.

Rolling Down the River
Derek Fassio (far right) was on a nine-day unguided float-trip down Alaska’s Talachulitna River when he laid into this 12-pound chum salmon. The fish inhaled a fuchsia-colored fly pattern Derek’s friend had given him.

**Set the Alarm **
While her father and boyfriend beat the Klamath River to a froth early one October morning, Christine Bowman, of Dunsmuir, Calif., slept peacefully in the car. The extra rest paid off when Christine rose with the sun and promptly caught this 18-pound hen king salmon-her first river salmon ever.