Fish of the Year Page 4 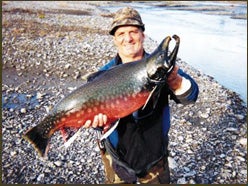 **Worth the Wait **
It had been a slow day in Lake Huron’s Saginaw Bay for Joe Butts, his father and son until this 30-inch walleye hit one of the bottom bouncers they were trolling. It took Joe 10 minutes to get the fish to the boat so his father could net it.

**Just Killing Time **
After tagging out on his Alaska moose hunt on the morning of the second day, Dominic Sarinelli, of Hopatcong, N.J., and his two friends spent the afternoon pulling giant Arctic char, like this near 20-pounder, from a small pool in the Kougarok River.

Like Mother, Like Son
Mom Paula and son Rodney Sunday spent much of last summer fishing in various locales. Paula boated her 22-pound salmon after a 30-minute battle on high seas in Lake Ontario.

Five-year-old Rodney, meanwhile, caught his four-pound bass from a family friend’s farm pond in Maryland. Rodney doesn’t usually like to divulge what he uses for bait, but he insists live minnows catch him the most fish.