Fish of the Year Page 5

A Sampling of the many great photos and stories we received from our readers. 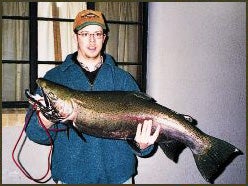 Plan B
Calvin Biddix and his wife were fishing near Afognak Island, Alaska, when this 2991/2-pound halibut hit. Biddix reeled it to the surface three times just to have it dive back down. The fourth time he got it up, Biddix shot the fish in the head four times with his .357. It took a logging skidder to lift the fish off the boat.

**Muskie After Dark **
Mario Ramirez, of Highland Village, Tex., bagged this 29-pound, 51-inch muskie in Clay Lake in southwestern Ontario. The fish hit Ramirez’s spinnerbait at 9 p.m. in a weed bed in a back bay of the lake.

**Try, Try Again **
This 61/2-pound bass snapped five-year-old Toby Helgeson’s line while he was fishing for sunfish from a dock. His dad, John, handed him another rod and the bass bit again on Toby’s next cast.