Water weeds are grazing grounds for bass in summer. Don't just count on luck this summer. Follow this advice. 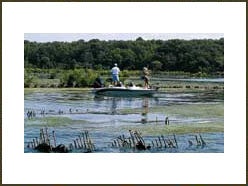 Lloyd Talent and I made our casts simultaneously, and our topwater lures landed within microseconds of each other-splat, splat. Talent and his partner, Dave Precht, were fishing on one side of the broad expanse of matted hydrilla that ran out of sight in both directions. Billy Wann and I shared a boat across the weed bed from them. The only variance was our respective positions; otherwise we were chunking identical plugs to the same place and retrieving them in the same manner. On that cast, however, I couldn’t help but notice an important difference between Talent’s lure and the one I was using: His plug returned to the boat with a six-pound largemouth attached to it, and mine did not.

The sequence was repeated often that summer morning on Wheeler Lake in northern Alabama, which only added to my frustration. Talent and Precht outfished Wann and me by at least two to one, even though we all were working the same hydrilla patch with the white soft-plastic Popper that Talent developed for Mann’s Bait Company (334-687-5716).Yet the side where Talent and his partner wound up was where most of the bass wanted to be, if only because the water was slightly deeper there.

Bass in the Grass
Fishing weed patches in a big lake is always tricky. When you’re fishing an impoundment like Wheeler, or even one of those huge gouged-out glacial lakes in the upper Midwest, there could be miles of weeds-emergent and submergent. The places where bass might be positioned in these big green monsters are almost infinite.

An angler can fish as much water as possible and hope for pure blind luck, which is always helpful but seldom dependable, or he can focus on the places likely to attract bass. For example:

Be attentive when fishing weeds. Look and listen for those mini-eruptions that signal a minnow’s end or a near miss by a bass. Sometimes you can spot small openings in the solid green stuff where foraging bass got particularly rambunctious.

Lures to Fling
Early or late in the day, you can assume that bass will be feeding near the surface. If vegetation covers the top, use weedless floaters like the Mann’s Rat, Moss Boss or the ScumFrog. Retrieve them with a slow, steady cadence. If the weeds grow just under the surface, add buzzbaits, top waters or soft-plastic jerkbaits to the mix.

Bass may move deeper in the water under the weeds when the overhead sun increases light penetration and the fish want more ambush cover. In such cases, try a big Texas-rigged swimmming-tail worm. Instead of letting the slip sinker slide up and down your fishing line, peg it against the hook with the end of a toothpick. If you don’t care to waste a good toothpick, use one of the “Florida Rig” bullet weights sold by Gambler (954-969-1772). It screws into the head of the plastic worm to keep weight and bait connected. Owner (714-668-9011) is marketing a screw-in leadhead-and-hook rig called the “Ultra Sled Head.” It looks promising for fishing weeds, too.

The reason you want the sinker to stay with the hook is to control where the bait is. Otherwise, if the slip sinker goes to the bottom while the worm is hung up on a stem of hydrilla or a water hyacinth at the surface, it’s not going to do much good. The weight of the pegged sinker should be determined by the thickness of the weed cover. If the veggies are fairly solid, fish vertically from a few feet away and employ a heavier weight on the line. You may even have to smack the bait down on the matted vegetation to get it to penetrate. Once the lure is through, jiggle it for a few seconds until you’re satisfied no bass is home or all heck explodes under the green stuff. Be sure to use line that is at least 17-pound-test. Horse a bass up and out before it gets into a hay bale’s worth of weeds and breaks the line.

Finding bass where there are miles of weeds is never a walk in the park. Even when you think you’ve located bass, there are other problems to worry about, like using the right bait or taking the right approach. But that is fishing. I’m convinced Talent and Precht caught so many more bass than Wann and I did that summer morning just because their topwater lures took a different course after touchdown and the bass wanted it that way, that day.

Talent, who just turned 75 and has lived long enough to be fairly sure about most things, isn’t so sure about this. His only comment is something you hear a lot from bass anglers and is about as good an explanation as any: “Fish are where you find them.”