Fishing in the ‘Hood

Give small waters near you a cast or two. 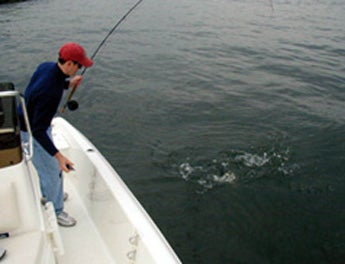 I like trips into the boonies as much as anyone, but if it comes to staying home and fishing or not fishing at all, there’s no contest. Okay, I hear you grumbling about the crowds on popular local lakes, but there’s a way to avoid all that. A little extra digging will turn up waters near your home that see little fishing pressure. They include small lakes, rivers and ponds that take real effort to access and often don’t have boat launches.

Close To Home
The rivers near home I’ve been targeting recently have terrible reputations. Most of them have served as dumping conduits for industry for more than 100 years. With the passage of the Clean Water Act in 1972, things began to change, albeit slowly. Water-quality-wise, these streams have made an about-face within the last 10 years. Cinderellas they are not, and you wouldn’t want to take a cooling sip from them for fear of ingesting giardia. But the rivers don’t stink anymore and their water has cleared remarkably. Fish-including bass, trout, walleyes and various types of panfish-have rebounded. I’m betting there are waters like that near you.

Reputations do die hard, however. Local anglers who have long considered them pools of pollution generally shun rivers that have gone through powerful rehab. During times when some fish species run from lakes or marine environments, these waterways see token fishing effort, but that’s all. Too bad, because such overlooked waters can provide dynamite action. How to find such spots? Begin a dialogue with state fish and wildlife information officers, state fisheries biologists and wardens.

The outdoor writer at your local newspaper will likely have an inside track on rivers returned from the brink as well. That writer may even have done an article or two on some of the “sleeper” waterways. Local bait shops can also provide good intelligence.

Sometimes it’s dam decommissions that create new fishable water, but in most cases it’s simply the reduction or complete elimination of industrial pollution. Some of my favorite places now produce stellar fishing for smallmouth bass and assorted panfish. The fun is figuring the rivers out. Don’t be fooled into thinking these waters nurture good fishing during only one season. You’ll need to unlock their inner tickings and experiment during different stretches of the year. Search and you’ll find access from small bridges in the suburbs or from back streets in old mill towns. A state atlas and topo maps will put you on stretches you didn’t know existed.

I’ve found a handful of beautiful little waters over the years, but one of my local favorites is Maine’s Androscoggin. Some natives claim it’s a river where a person who falls in will never come back up, a place where, they promise, chemical effluent will melt your line. Not these days. Today, it’s a great smallmouth stream.

Better Than Expected
I was skeptical about the ‘Scoggin on my first spring outing with my buddy Macauley Lord a while back when the river was high and boiling over mid-river boulders. We started out in a pretty tributary that we accessed below a steep drop, having dragged frameless River Master and Outcast kick boats down the cliff. These little inflatables are one key to making a successful river getaway. They can probe virtually untouched sections, provide good positioning control and handle pretty darned swift water, which was an especially good thing the day Lord and I fished the ‘Scoggin. All the neat mid-river smallmouth hideaway ledges that cried out for fishing in normal flows were flooded. So we started fishing the feeder near its entry to the main river.

Lord, L.L. Bean’s head fly-casting instructor, started with a streamer concocted of some exotic Finnish raccoon and white marabou. He nailed a high-jumping bass almost immediately, while I slipped an albino Slug-Go down toward the same concrete piling of the washeed-out bridge where his smallie hit. Bingo. More and more bass came from the upstream bridge support. When we drifted on downriver, two more bass ate and then things slowed. We were in a slough off the main water by then and I switched to a small spinnerbait, letting it fall in the minimal current and bringing it back slowly. It became the day’s hot bait.

I glanced at Mack examining his streamer. It had turned brownish.

“Don’t be silly, it’s just the tannin staining it,” he said. “Oh, do you have another spinnerbait?”

A little later in the year the mid-river boulders and ledges would hold fish well and could be reached easily using the little kick boats. For now we zipped past them, then paddled in place with our foot fins and cast pockets and protected areas behind shore fingers. Most gave up fish. I tried a crankbait but it produced only one bass, and I returned to the spinner.

Local Treasures
Wherever you fish, as the water drops and spawning commences, shallow cover, flats edges, shorelines, coves and tributary mouths with gravel hold bass. Panfishers will want to probe quiet backwaters where they occur; northern pike love to lurk at slough mouths adjacent to faster currents. Later in the year you’ll need to hit any cover you can find to catch largemouths. In smallmouth country, look for the fish in current breaks of the main river as well as ambush spots near shore that are washed by a modicum of current.

Some mid-river structure isn’t visible but should be hunted, especially in mid-season. Subsurface rocks, corrugated bottom, ledges, caves and channels provide bass with great ambush places, funnel food and provide current breaks while oxygenated water flows past to the side or overhead.

Another nice thing about fishing so-called second-class rivers is that bass, especially, haven’t become burned out on popular lures of the day. This is particularly true for grubs, tubes and spinnerbaits, which are overused in popular reservoirs and large lakes. A trout or salmon flutter spoon is another bait that works well for me in shallow sections from mid-river to near shore. You’ll need to crimp a little split shot ahead of these ultralights in order to cast them on spinning gear. Choose the spinners with narrow blade configurations that are suggestive of many indigenous minnows.

Find the local waters-rivers or small lakes-most anglers pass by. You never know when you’ll hit a piscatorial bonanza, or how close it’ll be to your back door.