The best ways to get a fish in your boat. 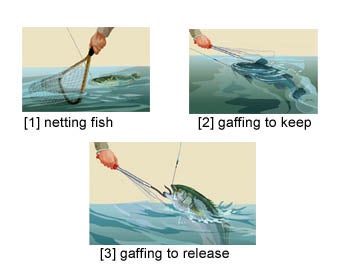 Employed correctly, nets and gaffs make for quick, easy landing. But mishandle them and you’ll look foolish, or worse, lose or harm your catch. These tips will help your technique.

1. Netting Fish
When fish are played out, they lie on one side, at the surface, fins fluttering weakly. As a tired fish is brought close, submerge the net, opened toward the fish. The fish should be led into a net headfirst as the net is raised quickly and firmly.

With big fish, be certain the net’s opening and mesh are large enough to accommodate it. If you have any doubts about whether your net can handle a fish, land it by hand.

2.Gaffing to keep
Gaffing is similar to netting. The gaff man stands ahead of the fish and angler, so the fisherman sees the process and can counter any moves a fish makes.

A gaff should strike deep into the back muscle under the dorsal fin. It’s best to hit a fish with a quick, fluid gaff motion, which swings it up and over the gunwale.

3.Gaffing to release
Stick the gaff into the thin, fleshy part of the lower jaw if you’re going to release the fish. The fish is then gently lowered back into the water and allowed to revive. For large fish, a gaff can be used to “pin” a fish by its lower jaw to the boat’s side as hooks are removed.