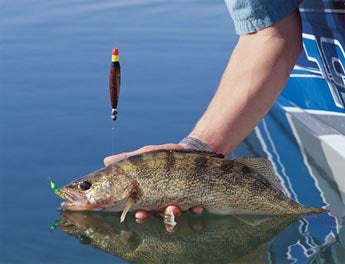 Greg Bohn’s lifelong fascination with bobber fishing began when, as a boy, he first saw a bluegill pull his bobber under. Over the ensuing four decades, Bohn has refined his bobber-fishing skills to the point that he’s now known by many as “Mr. Slip Bobber.”

Bohn has fished slip bobbers for walleyes throughout his 30-year career as a fishing guide in northern Wisconsin. But it’s not just a local technique. Slip bobbers have also produced walleye catches for him throughout the Midwest, in Canada and in numerous big-money tournaments.

“Nothing outfishes a slip bobber,” Bohn says. “I’m constantly amazed at how consistent they are. One day I fished a jig between two of my customers’ slip bobbers. They caught 20 walleyes and I never got a sniff.”

Bait Suspenders
Slip bobbers cover a wide depth range and can be employed in many fishing situations. Bohn has used them to catch walleyes in water from 2 to 45 feet deep and over submerged vegetation, stump fields, rocky reefs and brush piles and in standing timber and river currents. As it dances on the surface, a slip bobber imparts all the action necessary to tempt walleyes to bite.

“There is no more effective way to present live bait than with a slip bobber,” Bohn says. “It’s especially good early in the season when sluggish walleyes want something slow.”

Line Choices
Making an effective slip-bobber rig isn’t just a matter of assembling the parts randomly selected at a local fishing tackle store. Bohn settled on all the components of his perfected slip-bobber rig (see illustration above) after years of trial and error. He starts by running the fishing line, which is 10-pound-test Stren Magnathin monofilament, through a pink, braided-line bobber stop. The bright color atop the bobber lets him know when his line has dropped to the proper depth.

[pagebreak] “Never trim the tag lines after you tighten the bobber stop,” Bohn says. “They make the knot easier to see, and they make it easier to retighten the knot after it loosens.”

Float Plans
Three of Bohn’s favorite slip bobbers are the oval or pear shape, the pencil shape and the waggler, all in balsa. He carries each style in several sizes. The pear bobber supports a lot of weight and usually gets the nod when Bohn fishes leeches.

If waves make a pear bobber (and the bait beneath it) rise and fall too drastically for sluggish walleyes, Bohn switches to a pencil bobber, which isn’t as responsive to wave action. In especially windy conditions, Bohn goes with a Thill TG Waggler float. A long, thin top stem allows the majority of the Waggler, and the line from the rod, to stay beneath the surface and avoid being pushed around by the elements.

“Bobbers with orange tops show up well under most conditions, especially on sunny days when the water is choppy,” Bohn says.

On the business end After threading his line through a slip bobber, Bohn ties it to a No-Snagg swivel made by Lindy. The swivel features an oversize split ring on the top end that prevents it from lodging in the bottom of a slip bobber’s stem when you reel in and cast.

To the bottom of the swivel Bohn ties a 2-foot leader of the same line that’s on the reel. When he fishes over snaggy bottoms, he opts for a leader that tests 2 pounds lighter than the main line so it breaks first, saving the swivel, bobber and bead.

Depending on the size of the bait, Bohn ties the leader to a No. 2 to No. 6 Tru-Turn Blood Red Aberdeen hook. He is convinced the red hook provokes more strikes.

[pagebreak] Vertical Attractions
Another deadly option is what Bohn calls a “vertical jig” that hangs straight up and do. It is similar to an ice fly with an oversized hook. The 1/32- and 1/16-ounce sizes are Bohn’s workhorses, though he occasionally goes to a 1/8-ounce jig when fishing deep. Light jigs give the bait more freedom of movement and are less likely to be rejected by a walleye.

“I’ve used vertical jigs and traditional horizontal jigs for many years,” Bohn says. “The buglike appearance of the vertical jig draws more bites, and it does a much better job of hooking walleyes because the hook points straight up.”

Bohn fishes jigheads in orange, green and in combinations of these “perch” colors. The jigs are dressed only with live bait.

In early spring and late fall when the water is cold, Bohn tips his jigs and hooks with 2½- to 3-inch fathead minnows or 3- to 4-inch chubs. In warmer seasons, he has discovered, leeches are by far the best bait to present beneath a slip bobber.

Balancing Act
Bohn strives to keep his baits as light as possible, but there must be sufficient weight to reduce the bobber’s buoyancy. That way, a walleye will feel little resistance as it takes the bait.

“If I can get by with the swivel and a jig, I don’t add weight,” Bohn says. “When I need weight, I attach a rubber core sinker at the leader’s midpoint.”

When you’re casting to an area that is deeper or shallower than where the boat sits, repeatedly cast the icefishing weight with the slip-bobber rig to the fishing spot. Adjust the stop knot after each cast until the bobber floats 1 foot beneath the surface with the weight on the bottom. When you remove the weight, of course, the bait will hover 1 foot above the bottom.

Tackle tips
Bohn’s custom 7-foot 2-inch Lamiglas spinning rod has plenty of backbone yet has a soft tip that casts a bobber far without flinging the bait off the hook. He matches the rod with a Shimano Symetre 2000 reel. Turning the reel’s rear Fightin’ Drag II lever to the left reduces the drag to the point that a big walleye can’t pull an untended rod overboard. Pushing the lever to the center returns the reel to the preset drag setting that he wants.

Adding Motion
When fishing from an anchored boat, Bohn casts quartering upwind and lets the breeze sweep his bobbers past the boat so his baits cover more water. He also drags slip bobbers behind a boat drifting broadside to the wind (see illustrations above). On flat-water days, Bohn imparts action to his baits by twitching the slip bobber after it has been drifting slowly for a while.

In rivers, Bohn positions his boat along the edge of a swirling eddy and lets the current carry the slip bobber where it will. The bobber will often travel in a circular motion and come back around toward the boat, effectively covering the edge of the current.

Though Bohn catches walleyes on slip bobbers in many different situations and at varying depths, the one constant he looks for is a plain, flat bottom, as opposed to a drop-off.

“You have to keep the bait close to the bottom for walleyes,” Bohn says. “If the bottom has a lot of rises and drops, your bait is going to spend a lot of time out of the strike zone.”

[pagebreak] How to Book A Bobber Trip
For guide service, contact Greg Bohn at Strictly Walleye Guide Service, 715-356-4633; greg@gregbohn.com. His new book, Master the Art of Slip Bobbering, the Deadliest Method for Walleye, is available directly from Bohn for $12.95 plus $1.95 shipping and handling.

Chow Time In the Weeds
In the spring, Bohn concentrates on shallow bays no more than 8 feet deep with new weed growth on the bottom. In northern Wisconsin, the vegetation typically is elodea. The grass starts out only inches high and might reach a foot high by the end of May. It attracts minnows and young perch, and walleyes move in to feed on them. Dangling a minnow over the grass with a slip bobber is an unbeatable method here.

As different types of aquatic vegetation, such as broadleaf cabbage, coontail and deep sand grass, begin to grow, Bohn works them with his slip bobbers and continues to catch walleyes.book, Master the Art of Slip Bobbering, the Deadliest Method for Walleye, is available directly from Bohn for $12.95 plus $1.95 shipping and handling.

Chow Time In the Weeds
In the spring, Bohn concentrates on shallow bays no more than 8 feet deep with new weed growth on the bottom. In northern Wisconsin, the vegetation typically is elodea. The grass starts out only inches high and might reach a foot high by the end of May. It attracts minnows and young perch, and walleyes move in to feed on them. Dangling a minnow over the grass with a slip bobber is an unbeatable method here.

As different types of aquatic vegetation, such as broadleaf cabbage, coontail and deep sand grass, begin to grow, Bohn works them with his slip bobbers and continues to catch walleyes.