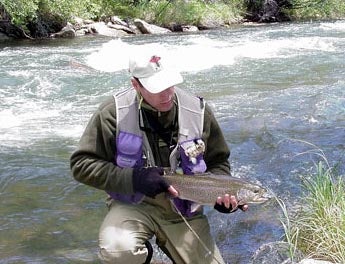 The fact that a wild trout will nab a bit of baloney and occasionally something as ridiculous as a cigarette filter drifted into its lie is mostly ignored by hatch-matching anglers. But it ought to tell you something. The inimitable Lee Wulff once wrote, “I’ve taken trout with dandelion heads, blueberries and little wild strawberries. They’ll chase pennies and dimes as they sink… Maybe they thought blueberries were beetles, the strawberries salmon eggs. Maybe they just didn’t give a damn.”

On top of that, what can drive seriously observant anglers to strong adult beverages is a trout’s confounding penchant to take a hard lure or natural bait that has nothing to do with what’s hatching from the water or falling from the sky.

Consider my recent visit to New Mexico’s San Juan River, where the fish regularly gulp midges. I was feeling wickedly perverse. Anglers were hunched like Quasimodos in usual pop-eyed fashion, trying to track their nearly invisible imitations. I began whipping a “fright fly special” (a weighted cone-head, black-and-tinselly Bugger) into the fray. I nailed a nice 20-inch rainbow while fishing partner Skip Halterman mopped up with one of his ultralight F.I.S.H. Catcher spinners (800-752-7132).

Triggering Devices
Who knows why trout eat what they’re really not supposed to be eating? During late grasshopper season trout are supposed to be conditioned to look for those kicking insects blown to the surface. Yet you can catch fish by twitching a small floating minnow or one of Rebel’s tiny terrestrial-imitative shallow runners along bank edges. Trout will even attack those baits when the real things are available, although the action of the lures is much different from that of the naturals. The fish are simply primed to pounce. Trout also are often inclined to eat something different if a major insect hatch they’ve focused on for several days is beginning to slow. However, you need to know the type of water in which they’ve been feeding. Don’t throw into slow back eddies if the fish have been feasting in somewhat faster water, and don’t crawl a lure across the bottom if trout have been used to looking up for signs of a hatch. I think they may just be getting bored with the same old menu, and a totally different offering comes as a nice surprise. Try a small bass popper sometime and you might be surprised, too.

Trout are opportunists and have built-in instinctive responses to things that suggest any likelihood of providing protein. Good waters host a smorgasbord of potential forage that includes a variety of insects, minnows, crayfish, shrimplike crustaceans, newts, salamanders, frogs, elvers and leeches. If conditions are such that the fish are no longer feeding on what they had been, or if they are just sporadically picking off the occasional bug, try something different. It’s likely to be perceived as a new main course.

Finding Trout
From summer’s end into early fall, on waters affected by high temperature, trout seek spring holes or places with cold-water seeps from shore. They might not be actively feeding but will strike a small crankbait or spoon, mainly in territorial defense of their comfort area.

Pitching natural baits you find along the bank into the water to elicit a take is a wonderful way to learn where trout are holding in a stream. When you start casting lures you’ll have confidence that you’re fishing the right area. And you don’t have to use the kind of bug or critter that provoked a reaction, or even a precise imitation of it.

I’m convinced that once you know where a fish is holding and likely looking for its food, a lure’s built-in subtle motion is the key to triggering strikes. One of my go-to baits is a tube. Berkley’s 1-inch Micro Power Tube is a good starting lure, but I might even try a 3-inch tube. Depending on the depth of the lie, I’ll fish the lure without weight, withh a jighead of the appropriate size, or subtly weighted with one or two BB-sized split shot inside the head. After inserting the split shot, I seal off the head with a plug made from an old plastic lure cut to size, supergluing it into the hollow tube.

With its wiggling tentacles, a tube can suggest any number of things to a trout: a minnow, a lizard, a large insect or simply something that looks good to eat. Other small plastics are also great. I like 1- and 2-inch curlytail grubs, 1- and 3-inch crayfish and little “critter” or lizard lures that suggest newts or salamanders. Small plastic leech imitations work in slower waters, as do panfish-size frogs. And don’t forget to try little plastic worms. Yes, trout will eat them. Hook them once through the head as in drop-shotting, or wacky-style through the middle.

Small soft twitchbaits can catch trout, too. I’ll use them out West as a change-of-pace offering for larger trout after a heavy Hendrickson, Green Drake or so-called Salmon Fly hatch. The 2-inch Berkley Power Minnow is a favorite.

The Surprise Factor
If you feel more comfortable using the plastics in natural suggestive colors, do so, but giving trout a shock treatment with bizarre colors like bubblegum or chartreuse is often the ticket. When anglers first discovered inland trout were eating bugs that everyone called shrimp-that’s what they resembled-artificials in pink were all the rage. But the only way you get pink shrimp is to cook them. Still, the hot colors worked.

The surprise factor isn’t foolproof, but it works often enough that if you don’t try it, you’re missing a heckuva good bet.