The run-and-gun way to jig up walleyes this winter. 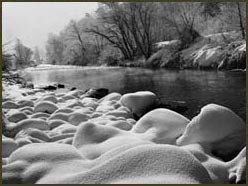 After staring at a pair of motionless tip-ups all afternoon, I was just getting ready to wind them in when I spotted Jim Schneider’s pickup headed my way. He pulled right up to me on the lake, rolled down the window and asked, “Did ya’ leave any for me?”

“This spot’s dead,” I informed him. “I caught a couple of walleyes first thing this morning and haven’t had a flag since.” Paying no attention to the bad news, he started unloading his fishing gear as I was winding in one of my tip-ups. “Mind if I use your hole?” he inquired. “It’s all yours,” I said. “I’m outta here.”

Before I could get my other tip-up wound in and put away, Schneider set the hook and soon had a nice walleye flopping on the ice. “What do you think of these new baits?” he asked, and I thought I detected a slight smirk on his face. He shoved his gloved hand toward me. It held a little minnow-shaped lure with a plastic tail and single hooks at either end whose points were turned inward toward the middle. “It’s called a Jigging Rap,” he said.

Message Received
If memory serves me well, that incident took place on a cold winter day in 1968. Since then, I’ve never gone icefishing without a supply of swimming minnows like the Jigging Raps.

After that eye-opening experience, I started to take jigging with artificials much more seriously. I began playing around with other types of lures, including a variety of bladebaits and jigging spoons. I spent a lot of time trying to figure out exactly how and when to use each of these types of baits, but once I started getting proficient with them, my walleye catch rate skyrocketed. I was catching two or three times as many walleyes as I used to catch on tip-ups.

Jigging is so effective because the jigging action draws strikes from walleyes that ignore a stationary bait, and the technique enables an angler to be highly mobile. When you’re fishing with a tip-up or a bobber rig, you have to readjust your depth every time you move. With a jigging lure, all you do is reel up and drop your line down another hole to the proper depth.

In the last decade, jigging has really caught on among the winter walleye crowd. Before that, most anglers sat in fish houses and waited for the walleyes to come to them. Now you see anglers drilling dozens of holes over bottom structure; they fish in one hole for a few minutes and then jump to the next. To be successful with this “run-and-gun” technique, you must have the right equipment and know what to do with it.

Jigging Tools
A handheld GPS unit is an important icefishing tool, especially if you remembered to punch in some of your favorite summertime spots.

Another time-saver is a portable sounder or depth finder. Unless you’re on slushy ice, you should be able to squirt a little water on the ice and get a depth reading without taking time to drill a hole. Most serious walleye anglers use a sensitive flasher, which enables you to see your lure and the fish. This way, you can see how the fish respond to different jigging actions.

A lightweight, fast-cutting power auger is critical for maximum mobility. The Laser from Strikemaster (763-263-8999; www.strikemaster.com) is one I like. If you have to lug a heavy auger and struggle to cut a hole, you won’t be able to cover much territory.

After you’ve determined the configuration of the structure by using your sounder, drill rows of holes so you can fish various depths. If the structure tops out at 20 feet, for instance, and gradually slopes down to 30, drill about five rows of holes at two-foot intervals to cover the entire drop-off. The deepest holes are likely to be best in midday; starting at dusk the shallower holes will come to life with feeding walleyes.

Try to get all of your holes drilled before dusk; if you start drilling late in the day, when the fish are coming in to feed at night, you’ll drive them away and they may not come back. As for tackle, I use a fairly stiff graphite rod (about 30 inches long) and a light spinning reel spooled with limp 6-pound-test mono. To minimize ice buildup on the tip, replace the standard tiptop with a good-sized fly-rod tiptop. Attach a small, round-nosed clip, such as a Fas-Snap, to the end of the line so you can change baits quickly. It’s a lot easier than trying to tie knots with cold fingers.

Tie in a small barrel swivel (size 14) about 18 inches above the lure to avoid line twist.

Make It Look Real
There’s a lot more to jigging for winter walleyes than dropping a bait down a hole and jerking it up and down.

The first challenge is to select the right type and color of lure. In clear water, I generally use a jigging spoon or swimming minnow, usually in natural baitfish colors such as silver, silver-and-green, gold or perch. In murky water, I’ve had the best luck with a swimming minnow or a bladebait in bright or fluorescent colors, particularly chartreuse and orange.

The next task is to develop the right jigging stroke. Here are some tips for using each type of bait:
SWIMMING MINNOW This bait darts forward with an upward sweep of the rod. Each sweep sends the bait darting off in a different direction.

After each sweep, hold your rod motionless while the bait settles back to center. Try to keep the bait 6 to 12 inches off the bottom. The strike will usually occur after the bait has become immobile. Don’t jig the bait nonstop.

JIGGING SPOONS Instead of darting to the side on the upward sweep, this bait flutters to the side as it sinks on a slack line. If you make the mistake of lowering the bait on a taut line, you’ll kill the sideways action and the bait will not be as effective.

When walleyes are aggressive, they will sometimes strike a jigging spoon as it is sinking, but more often they’ll grab it after it settles.

BLADEBAIT This bait doesn’t dart or flutter to the side, but it emits a strong vibration on the upward sweep. Most often, a walleye strikes a bladebait as it’s sinking, so the best technique is to give the bait a sharp upward sweep and then follow it down with your rod tip to keep the line taut.

Regardless of the lure, your odds are best on the first few jigging strokes in a given hole because walleyes wise up quickly. I seldom work the same hole for more than five minutes. That’s why it’s called run-and-gun.