A Fury of Pike

Old and new ways to fool these hungry critters. Find out where they hide in order to come up with the best pike this season. 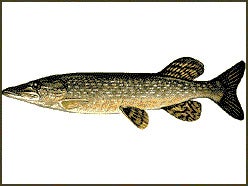 Remember how it was in early spring when those big northern pike were eating like crocodiles, inshore and shallow? Recall how the fish soon slipped away from the banks along newly formed weed-bed corners and hung out like street thugs just waiting for your bait to sashay by? Then things changed. Fishing pressure and summer weather moved the choice fish offshore and made them tougher to catch. Okay, pike fans, get ready; the fish you really want are back.

The big ones come from the depths, suspending first over humps, around rocks outside the main weed beds or off points that reach to drop-offs. They are wraiths with toothy smiles waiting for a kind of sea change, and that change is weather. Like the pike, I wait for a string of fast-moving fronts, leaden skies, some rain and wind and lower temperatures. A week of ugly weather can kick off a pike feeding fury that’s almost scary. It lasts but a short while, maybe 10 days at most, so you need to watch the signs, get on the water and start fishing.

Power Piking
Returning northerns cruise the weeds, taking up ambush points at turns and cuts and points in the beds. With enough water they’ll often move farther, inside the submergent weed lines, and cruise the open slot between weeds and shore. The best way to locate the heavy feeders is to troll the shallows where the cover permits. This is power stuff; you need to tow big spoons, large swimming plugs and maybe an in-line, bucktail-dressed spinner.

My first rule is to troll close. I’ll set at least one bait almost in the prop wash, perhaps eight feet behind the boat. I’ll troll fast, just barely keeping the lures working under water. For even faster presentations, I’ll use one- or two-ounce jigs with lots of flash in their skirts, big plastic paddle tails or Mylar trolling flies. If the pike are really in a racehorse mood, I’ll speed up and troll the smaller, skirted trolling heads commonly used in salt water for medium-size marine fish. Marine catalogs like Bass Pro Shops’ Offshore Angler (800-463-3746) list such lures.

None of this is to imply that once you hit a fish or two and mark the spot, you cannot stop and cast. It’s possible, too, that weather conditions won’t develop properly to trigger the big autumn bite where you are. Even so, casting to the cover you worked in spring and early summer, and probing the pockets with a pitching technique where needed, will produce pike. In such instances, big spinnerbaits are hard to beat. Use those made with titanium alloy wire if you’ve a choice because they can withstand a lot more abuse from big pike than ordinary spinners. And don’t just use spinnerbaits with silicone or rubber skirts; bucktail is more durable and provides a different look. I like chartreuse, green, yellow and black. Hard and soft jerkbaits and swimming minnow baits work well, too. Pike in big riverine lake systems utilize hard structure like reefs, sandbars and gravel bars as they move from deep offshore water back into sloughs with more vegetation. Jighead soft-plastics with fork, paddle or corkscrew tails bumped along bottom can be dynamite.

Boomerang Bites
Later in the season, or when cooling water has made fish persnickety, you’ll need to slow down and probe. Here’s when adding natural bait, such as big shiners or suckers, to your lures can make a difference. Try them on big spinnerbaits first, then jigs when a slower presentation is required. If you’re missing strikes you may need to use a stinger hook, which can be rigged as simply as slipping the eye of the stinger over the point of the lure’s hook. Alternately you can build a stinger rig made up of short wire leader plus the trailer hook. Simply hook the trailer into the bait.

If the fishing becomes really tough and the bites are few and far between, I’ll switch to a slip float with a big live minnow below it. I pitch an unweighted minnow into cups annd pockets in the weed lines, or work one on a weighted line along the less weedy bar edges where I want to keep the bait near bottom. You might have to wait out the pike for a while, but the method is deadly. Icefishing is productive for northerns. Think of the very late fall season as icefishing without ice.

There’s a new fishing tool that’s going to make such slow presentations even more irresistibleÃƒÂnot only for pike but for bass, trout and all sorts of panfish as well. The device is called the Boomerang and you’ve likely seen it already advertised on TV.

Depending on how it’s rigged, the Boomerang Fishing Pro by Renosky (800-342-2803) is a drop-shot system or a tandem teasing outfit. It is basically a nine-inch leader of Spectra braid (of the so-called “superline” family), with one major difference: The fibers are woven around what is essentially a rubber band, so the leader stretches. Rigged properly, the device creates an action that’s incredible.

To entice active, feeding pike, clip a big topwater lure or shallow-swimming minnow lure to the Boomerang. A small, soft-plastic swimming baitÃƒÂshad, tube, paddletail or whateverÃƒÂgoes ahead of the big lure. Rod snap causes the Boomerang to stretch and contract, which causes the large lure to jerk and gives the forward lure the crazed action of a totally disoriented bait. Most times game fish will hit the lead lure, if only to keep it away from the “predator” behind it. I worried that the stretch of the Boomerang would result in missed strikes if fish hit the trailing large lure, but that wasn’t the case. Using a 61/2- or 7-foot rod, a sweep set takes out all stretch and the 80-pound-test Spectra sets the hooks quite nicely. You can also team the Boomerang with a big (six- to nine-inch) soft-plastic jerkbait hooked at the head like a Banjo Minnow. The stretch leader will give the lure outstanding action. During tests, even 18-inch trout hit 9-inch Boomerang-rigged muskie baits. For toothsome fish you’ll want to tie in a four- to six-inch length of wire ahead of each lure.

Another Boomerang option is to rig it drop-shot-style with a sinker (or a skirted jig) at the end. Then add a five- to six-foot monofilament leader that runs from the Boomerang to a barrel swivel. Your main line runs through the forward eye of the swivel and a bead is slipped on, which is then tied to your lure. For pike, tie in that short wire ahead of the lure. Pitch or flip the sinker into pockets or turns in the cabbage weed, let it drop and then begin twitching. You can make a soft-plastic bait dance in place like a dying minnow. Work along weed lines in a controlled drift. Try it out in deeper water over humps and reefs, too. Tip: Make sure to tie your sinker to the end of the stretchable rig with a short piece of lighter mono. This way, if you snag you won’t lose the entire Boomerang and the lure above it.