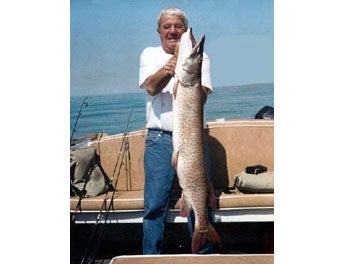 Jon Bondy and I were prospecting for muskellunge, jigging in water more than 20 feet deep with baits the size of the fish many people catch. By the time we finished our short afternoon trip on the Detroit River, we’d boated two specimens that any muskie angler would have been tickled to hook.

Bondy, an Ontario fishing guide, has found that he can catch more and bigger muskies with an unusual method of his own invention. The deep-jigging technique he came up with was born out of his frustration with typical fishing approaches for muskies. While presentations such as casting topwaters, jerkbaits and bucktail spinners in the vicinity of weed beds work in low-light conditions, Bondy concluded that they were all but useless after the sun rose high in the sky and muskies moved offshore.

Where Midday Muskies Live
Bondy’s attempt to find a deepwater muskie pattern followed a logical progression of ideas. The guide first reflected on the results of previous fishing trips. Every spring, his customers caught a half dozen or so muskies from the river while fishing the bottom for walleyes. Some of his clients even boated a few muskies on hot summer days while fishing tubes or skirted grubs for smallmouth bass at Lake St. Clair. On several occasions, Bondy had seen muskies rush in and kill bass hooked by his customers in deep water. Which led him to wonder: If muskies inhabit deep water at least part of the time, why not fish for them there?

Bondy decided to start spending the noon hours of his muskie fishing days exploring the deeper water beyond shoreline weed beds and past the river’s drop-offs. At first he plumbed the depths with such lures as big bucktail jigs. Next he switched to the largest soft-plastics he could find. He caught a few fish, then tried a homemade soft-plastic lure equipped with two large treble hooks and a tailspinner. That’s when he hit the jackpot.

“Last spring I caught eight thirty-pounders during the first two weeks of the season, and they all came from jigging my lure,” says Bondy, whose fishing technique for big muskies in 20 to 30 feet of water has become the talk of the Midwest. “I’m convinced this technique will work anywhere there are big muskies- the St. Lawrence, the Niagara, in running water or in lakes.”

His fishing approach is simple: Working along the drops outside productive shallow-water areas, Bondy lowers his 7-ounce “Bondy Bait” to the bottom. He then snaps the bait up 2 or 3 feet and allows it to sink again in a controlled descent. Because of the size of the muskies he’s likely to hook, and the fact that the lures are huge, Bondy favors an 8-foot All Star Big Game Series bait-casting rod and matching Pflueger reel loaded with 80-pound-test braided line and a wire leader.

Bondy’s hand-poured Bondy Bait is fish-shaped and designed to mimic a freshwater drum (sheepshead), one of the top prey fish in the Great Lakes muskie diet. The baits measure slightly more than 8 inches in length, and although they’re large enough to entice the biggest brutes, they sometimes catch undersize muskies. Bondy has even boated a number of walleyes weighing up to 7 pounds on his homemade lures.

[pagebreak] Strikes are often jarring. Ninety percent of the time when a muskie gobbles the lure, it takes the bait on the fall, according to Bondy. Usually the fish stays deep and bulldogs on the bottom until it wears out. Some times a muskie will hit the lure as it’s being reeled to the surface.

Deepwater jigging seems most productive when the fish are in transition, either moving back out to the depths after spawning or being pushed to deeper water by colder temperatures in the fall or hotter weather in the summer. Bondy says he’s had his best fishing the first month of the season (which opens in early June in Michigan and Ontario) and then again from October through December as the water gets cold inshore. He’s coonvinced the tactic will produce strikes any time muskies are in their open-water haunts near the bottom.

“The important thing about deepwater muskies is that everybody’s missing them,” Bondy says. “Nobody’s out there in thirty feet of water looking for muskies on the bottom. They’re up on the flats casting or, if they’re trolling, they’re running their baits way over the fish.”

Going After the Loafers
Indeed, most muskie trollers generally work fairly high in the water column with shallow-running baits. But even if they use in-line weights or wire line to get down, as many trollers do, they still depend on the fish to come up after the lure. That might work fine for aggressive fish, but Bondy’s technique also covers fish that are merely loafing near the bottom. His big baits produce reaction strikes from neutral fish that just can’t seem to pass up an easy meal.

Bondy focuses on steep drops to gradual slopes, giving extra attention to structural elements such as points or river bends. But because he believes muskies are almost always on the move, Bondy thinks it’s more important to cover a lot of water than to home in on specific spots. So he drifts, using the trolling motor to stay on the structure, and keeps his bait rising and falling just off bottom.

The biggest challenge Bondy faces these days is getting his new clients to buy into the technique. “I get some strange looks at first,” he says, “but after a while they see.”

Tell me about it. I was leery myself until I saw a 4-foot-long muskie at the end of my fishing line wearing one of Bondy’s lures in the corner of its toothy maw.

It made a believer out of me.

[pagebreak] ** Handle Muskies with Care!**
More often than not, muskellunge anglers-especially those on guided trips-release their fish after the battle. Additionally, most states and provinces have established length limits designed to protect the breeding stock, which mandate the safe release of undersize muskies. Companies such as Frabill and Beckman offer a variety of big nets that will handle the biggest fish.

Muskies present a special problem for catch-and-release techniques, however, as the fish are large and strong and have formidable teeth. You have to handle them with care in order to get them back into the water in good condition and still keep all of your fingers.

Although you don’t want to land a muskie that’s still green, you also don’t want it to kill itself during the battle. Use a large landing net. Muskies regularly exceed 4 feet in length, and leading a lively specimen into a net head-first is not a given. Once the fish is boated, set the net on the deck and remove the bait. You might need to use a mouth-gripper tool or large pair of fish pliers to gain enough leverage to get the hooks out. Work quickly to minimize the amount of time the fish is out of water. Tools such as a Boga Grip or a Berkley Lip Grip Scale, which are easy to find in tackle stores or catalog outlets, will come in handy to hold a muskie’s head still while you’re getting the hooks out of its maw.

When removing a muskie from the net, it’s best to use a fish-handling glove to get a firm grip near the fish’s tail. After pictures or measurements, slide the muskie into the water, but hold on near the tail until the fish has recovered its equilibrium. You might have to move the fish gently back and forth under the water, as anglers often do with stream trout. You’ll know when the fish recovers its strength. Let go of its tail and it should swim away, safe and sound.