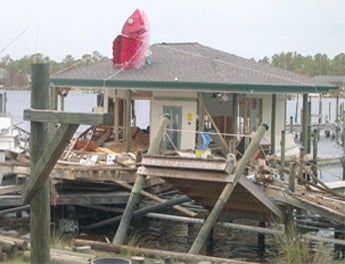 Just when residents of Florida and other Gulf states thought it couldn’t get any worse, another hurricane slammed the region. With Charley, Frances, Ivan and Jeanne all making landfall over a six-week period last summer, the storm season was a record breaker. Estimates put the damage at more than $23 billion.

In addition to the human toll, thousands of acres of wildlife habitat were damaged, including barrier islands and inland locations where toppled trees and flooding destroyed or damaged nesting habitat for turkeys, migratory birds and other wildlife. While trees and aquatic vegetation near Punta Gorda, Charlotte Harbor and the Ten Thousand Islands area in Florida were damaged, the destruction wasn’t as bad as it might have been since Charley stormed through so quickly. Despite original concerns, fish stocks were not severely affected. Oddly enough, they might have actually been helped.

“The old-timers always say that we need a hurricane once in a while to clean things out,” says Capt. Ralph Allen of Punta Gorda. “I don’t know if there’s any science to back that up, but I do know that since the storm, the crabbers and shrimpers have been having outstanding fishing.”

Bon Secour National Wildlife Refuge was closed due to extensive damage, part of more than $44.5 million in damage on refuges in Florida and Alabama. Fort Morgan Marina was among many marinas nearly destroyed. Beaches at Gulf Shores, Orange Beach and Pensacola, Fla., were redeposited inland. Ivan destroyed as much as 80 percent of the Alabama Gulf’s oyster beds.

Many charter captains and boat owners moved vessels to protected bays, yet for some it was futile. Boats of all sizes were strewn in yards and roads. Lack of accommodations hurt captains trying to salvage the red snapper season before it closed Oct. 31.

“As usual, the hurricane brought in a preponderance of groupers. You can go to a natural bottom and catch all the groupers you want,” says Capt. Maurice “Fitz” Fitzsimmons, based out of Orange Beach, Ala. “There’s a lot of reef damage. The larger ones probably have moved and it will take going out to find them. We’ll come back strong and be ready for the April 21 snapper season.”