Allegations of added weight are judged to be false. 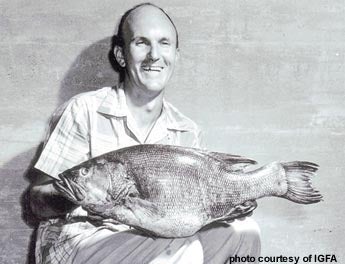 Fifty years after being pulled from the waters of Dale Hollow, David L. Hayes’s 11-pound 15-ounce smallmouth has again claimed the world record for that subspecies. Hayes’s bass, which measured 27 inches long and had a 212/3-inch girth, was disqualified by the International Game Fish Association (IGFA) in 1996 after allegations surfaced that a guide had stuffed 3 pounds of metal inside the fish. Hayes, now 80, was never accused of wrongdoing.

The Controversy
The Kentucky angler caught the bass on July 9, 1955. Because Dale Hollow Lake lies in both Kentucky and Tennessee, both states claimed the record. But in the mid-1990s, an affidavit surfaced that had been submitted by guide Raymond Barlow six weeks after the fish was caught, claiming that he had added weight to the fish. As a result, the IGFA disqualified the record. Kentucky followed suit. As Tennessee considered doing the same, evidence was discovered that vindicated Hayes.

** Vindication**
During the Tennessee Wildlife Resources Agency’s investigation, Barlow’s brother Ira (Raymond died before his affidavit was discovered) was located. Ira Barlow said his brother wasn’t at the dock the night Hayes brought the fish in. A polygraph test supported his statement. A man who had his picture taken with the fish as it was being weighed and other anglers who were at the dock that night were tracked down and interviewed. They supported Ira Barlow’s statements. The evidence persuaded the IGFA to reinstate the record. Kentucky officials have the matter under review.