Tiny spoons and spinners fish big in the fall when the bugs of summer are gone. 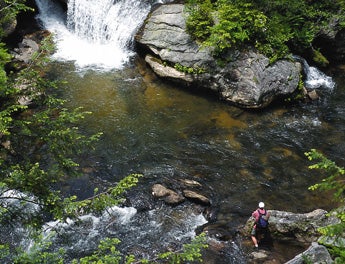 Once the hatches are just about done and the last of the season’s grasshoppers have fallen into the water, ultralight spinners and tiny spoons begin to shine on trout streams-in more ways than one. These miniature metal lures generally weigh about as much as the wing of a butterfly-in the Â¼0- to 1/12-ounce range. They’re so light they can’t be cast for much distance on regular spinning tackle without a split shot or the use of a casting bubble.

But don’t let their size fool you. Light though they are, these lures kick trout butt in the fall, when most rivers and streams are low and bug protein is hard to find.

**The Right Spin **
Ultralight spinners work differently than spoons, although both represent some sort of smallish minnow to predators. My favorite spinners are simple affairs built around a blade, two swivels and two split rings. Most of the time I use a spinner with a Colorado blade, which seems to put out just the right amount of vibration. Hildebrandt’s pre-made versions in sizes 0-3 are my favorites. Spinners swim along a tighter path than spoons and are best in slow to medium currents.

Sliver Baits
Spoons come in a wider variety of shapes and weights and can be used in fast or slow water. Acme’s fish-shaped 1/12-ounce Phoebe is an old reliable. Its arched bend produces powerful vibrations. The Phoebe is a dynamite trout catcher, as is Hildebrandt’s Shad King spoon, Eppinger’s 6-T Dardevle Skeeter and Luhr Jensen’s venerable Super Duper. Though the smallest ultralight “flutter” spoons are exceptional for trout, I’ve even used them for walleyes, lake trout and yellow perch.

Tackle for Wee Lures
If you’re fishing larger rivers where you can wade into open water or where overhead bank cover isn’t a problem, spinning rods to 7 feet are great as long as they have soft, flexible action. I like the extra length for “placing” the featherweights in holes and around current breaks such as rocks or submerged logs. This is where a casting bubble might come in handy, too, depending on how much water you’ve got to work with. In smaller streams, shorter ultralight spinning rods will probably work better and be more manageable in close quarters.

Choose a mid-size reel, not a miniature one with a tiny spool that can cause line to take tight coils and then foul up into snarls that are impossible to untangle. Use small-diameter monofilament so the metal bait can sink better. Four-pound-test is about right; I like Stren MagnaThin.

If bank cover is so thick that using spinning gear to cast is a hassle, try flyfishing tackle to get the tiny baits to the fish that are likely to be holding in front of you. Just don’t use your first-team flyfishing stuff. If you’ve got an old fly rod around, rig it with a 5- to 7-foot mono leader, tie on a spinner or spoon and go to it.

Try dapping or flipping first. If you want to go for more distance, attach a spinning reel and lob casts underhand or sidearm. The trout won’t care which delivery system you use, or how deft you are at presenting the lure. All they’re interested in is the package.

**Jerry Says **
Even a bream pole with a tip guide can be cut down some and rigged with a taped-on reel for featherweight metal lures. You could get fancy and wrap on a few guides along the length of the pole, but you don’t need to. Mainly you’d use this rig to flip the lures into holes and run them through pocket water. The extreme flex of a bream pole will let you take large fish if you don’t panic and try to horse them in.