Moving in any direction from Missoula, Montana, takes you to trout. And in late June when the stone flies come out, you can join a fantastic moveable feast. 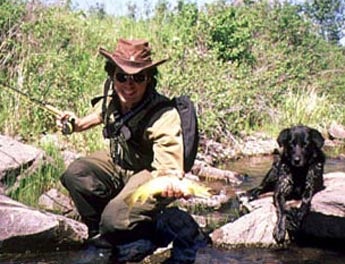 Missoula, you might say, is a nerve center of the Western fishing world. With this fine college town as a base of operations, you can fish some of the most venerable waters in the country: the Bitterroot, Blackfoot and Clark Fork Rivers, Rock Creek and the Little Blackfoot. Drive a little further due north out of town and you’ve got Flathead Lake, the largest natural lake in the West.

Then there’s the timing. For slam-dunk trout fishing on the rivers, aim for June and July for the salmon fly, stonefly and Green Drake hatches, as I did, or fish through July and August for hopper time. The brown, rainbow and cutthroat trout all make eating a major priority when there is so much protein floating above. And all summer long, the deep lake trout in the Flathead Lake will snap up a jig-fly combo. With daily bag a liberal 15 macks, you’d better have a big enough smokehouse.

Rock Creek
When I got to Missoula, I ran into some minor misfortune: the rains that preceded me had blown out the Bitterroot, Clark Fork and Blackfoot Rivers. But in a good little local fly shop, Kingfisher’s (shop slogan: “It’s about fishing, not fashion”), I read on the daily river report that Rock Creek was hot.

Golden stone flies and salmon-fly patterns like mini hotdogs with wings were what the situation called for. A San Juan-worm dropper could be added to the stonefly, though that’s a heck of a stinger you may want to reserve for slow times and special situations, like plying deep holes.

I had the best luck on Rock Creek casting to four different kinds of structure: the upstream ends of islands, especially in front of or along side piles of snags; short, deep channels along undercut banks; deeper flat sections studded with big, submerged rocks; and in pools just behind big, exposed rocks. Nearly all of Rock Creek runs through the Lolo National Forest, so there’s about 38 miles of creek access anywhere you want.

My strategy was to drive far down Rock Creek Road (four-wheel drive might be a good idea, at least when it rains) until I saw the big bugs in the air (by late June this is just about anywhere below where the pavement ends) and then searched for islands or boulder-filled runs. There are lots of trout all along Rock Creek, but these were some of my hot spots:

Below mile marker 33, there’s a big parking area along the creek. Downstream is a good-sized island. I walked out to the island on a fallen pine and then cast to a deep side channel. My stone fly was left alone, so I played dirty and put on the San Juan worm dropper. _Bang _- a nice 16-inch brown.

Around mile marker 20, near a trail head, is a tree with a sign nailed to it that says, “Wahlquist Creek.” Just upstream from this tree is a flat, rocky run. You’ll have to throw a good amount of line and do some fast mending, but I took two 15-inch cutthroats and two 16-inch browns here on a stonefly in about half an hour.

Around mile maker 19 is another island. Here, I took browns on a salmon fly pattern at the head of the island around a snag pile, and another brown on the opposite side of the island under low-hanging branches of cottonwood saplings. I made upstream casts, putting the fly beyond the branches and then letting it float under, stripping and mending as it came back to me.

Near mile marker 14, I parked just below the driveway for the Dalles Campground and fished the pools around the huge, dome-shaped boulders. Multiple 12- to 15-inch browns came from here.

You may be tempted to fish around the Welcome Creek Trailhead – it’s a popular place with lots of parking and a swinging rope bridge to get you to the other side of the creek. But the fish here get pounded all day, so if you try this spot, try it on the way down the road in the morning.

Right now (late August) the salmon fly hatch has pretty well petered out, though there e golden stonefly hatches through the month. Some of the biggest caddisflies I’ve ever seen come off Rock Creek in the evening, after five o’clock, and a size 10 Muddler Minnow fished just under the surface or an elk-hair caddis can turn the trick. Pale morning duns and green drakes are also happening. Good-sized Prince nymphs and brown or black stonefly nymphs, about size 10, are taking fish. But hoppers are the most fun right now. Dave’s Hoppers or the local patterns do fine.

Rock Creek’s browns, cutthroats and rainbows all run from 12 to 17 inches, though there are a good number of fatties pushing 20 inches here and there. All species have a fast take, so be ready to make a quick strike. There are also bull trout, which you must release immediately; some of this can run pretty big and will even slam a small trout you’ve already got on the line.

With larger flies you can get away with 3x to 4x tippets and seven to eight-foot leaders. But the PMDs and caddis flies need 6x and 5x respectively.

To reach the Little Blackfoot take Route 90 east from Missoula and turn off on Route 12 north, at Garrison. Follow Route 12 for about two miles until you see a dirt parking area on your left. This is a good public access point. Fishing is allowed along the river to the high-water mark. But from the parking lot you have to cross active railroad tracks to get to the water, so be careful, and absolutely, positively do not walk on or along the tracks or your buddies will divide up all your gear when that locomotive carries you away.

The Little Blackfoot is a classic meandering free-stone stream through pasture land. Working the edges with golden stone flies, Chernobyl ants, hopper patterns and Stimulators or big stonefly nymphs is the way to go. During the stonefly hatch and hopper time, the cutthroats and browns are pretty aggressive, so you can get away with 3x tippet.

Downstream from the parking area McKean and I found a pretty productive run, beyond a place where the river widens and flows flat around some islands. Opposite a rocky hillside we cast to fast riffles and pocket water and took a number of browns between 13 and 17 inches. This was the one place where I saw browns literally jumping clear of the water to snap up stoneflies.

Flathead Lake
Tapping a “Leadagator” jig on the bottom of Flathead Lake, 200 feet down, isn’t easy. And feeling the soft take of a lake trout is a learned skill, but I learned quickly.

Andrew McKean, his friend and lure-maker Dick Zimmer and I had trailered McKean’s motor boat up Route 35 along the lake to the Blue Bay boat ramp. Then we maybe spent all of three minutes slowly motoring away from the ramp, watching the depth gauge until we saw that we were in 200 feet of water.

“The lakers are down that far because they’re feeding on the mysis shrimp,” Dick said. “There are lakers at various levels, but in the deepest sections, the shrimp are way down and the lakers follow them.”

We stuck mainly with the Leadagator and “Trilobite” jigs, both of Zimmer’s making. The bright blue-and-white lead lures, coupled with a white kokanee salmon fly on a 10-inch dropper line tied about a foot above the jig, just sailed down to the bottom. I wondered if these things would be good for surf casting for stripers and blues, given how far they could be tossed.

Pretty soon the lakers were on, hitting the jigs mostly, with a few taking the fly. They hit with a light throb that you have to be attuned to and strike the second you feel it. Once hooked, the fish begin a staccatoed bam-bam-bam fight that doesn’t really turn into brawling until you get them within twenty feet of the boat. Then the bigger ones-anything over 20 inches-make lunging turns, while the smaller ones thrash.

This is purely a catch-and-eat endeavor, as often the laker’s swim bladder expands to a lethal limit when you bring them up from so deep. So you call for the “priest” as soon as the fish are in the boat and knock ’em dead, and into the cooler they go. The daily limit is 15 fish under 30 inches and one fish over 36 inches.

Between the three of us, we took 35 fish, all in the 15- to 25-inch class. I ate smoked trout sandwiches all the rest of the week while on Rock Creek, so the $17 nonresident tribal license I had to buy was easy lunch money.

get them within twenty feet of the boat. Then the bigger ones-anything over 20 inches-make lunging turns, while the smaller ones thrash.

This is purely a catch-and-eat endeavor, as often the laker’s swim bladder expands to a lethal limit when you bring them up from so deep. So you call for the “priest” as soon as the fish are in the boat and knock ’em dead, and into the cooler they go. The daily limit is 15 fish under 30 inches and one fish over 36 inches.

Between the three of us, we took 35 fish, all in the 15- to 25-inch class. I ate smoked trout sandwiches all the rest of the week while on Rock Creek, so the $17 nonresident tribal license I had to buy was easy lunch money.