View the rest of the story that ran in the October issue here. 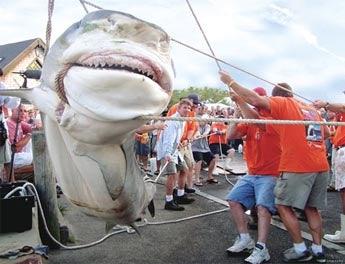 When the sun set on the Boston Big Game Fishing Club’s Monster Shark Tournament in July, talk around the dockside pubs was not so much about who had won the event, but about who had lost and how.

As reported in the October issue of Outdoor Life, Captain Damon Sacco and his crew on the Castafari out of Sandwich, Mass., seemed like a shoo-in for the victory. Crammed atop the boat’s deck was a 1,191-pound monster tiger shark that stretched 15 feet long. The problem was, Sacco arrived at the weigh-in six minutes late and was disqualified.

“Our biggest obstacle wasn’t boating the fish, it was beating the clock,” Sacco says about the largest fish one of his boats has ever caught. “I knew two hours out that we probably weren’t going to make it.”

In fact, it took more than two hours to wrestle the beast to the boat’s edge. Then they still had to get it aboard.

“We had a block and tackle snap on us as we tried to get it in,” says Sacco, who admits he has never tried to hoist a fish of that size onto one of his boats before.

Once the shark was secured on the deck, Sacco had less than three hours to cover the 65 miles of open seas between him and the Nantucket pier where the tournament weigh-in was taking place.

Sacco knew it would take cooperating currents-and a miracle-to make it in time.

“I ran the boat as fast as I could without overheating the engines. It wasn’t worth blowing an engine,” he says. He had to be careful as the additional weight of the shark to the starboard side of the boat began heating the starboard engine more than the other. To help increase speed, he also tried shifting the boat’s crew from the front of the boat to the back and around again, trying to find the right balance that gave him the optimum speed needed to get in.

[pagebreak] “I actually thought we were going to be about 15 minutes late,” he admits. “Approaching the weigh-in was wild.”

The boat had alerted tournament organizers of their catch so everyone on land was anxiously waiting. ESPN, which was filming the tournament, had their helicopters follow the boat in the final miles. People lined the channel that led to the marina where the Castafari was bound and cheered as it entered the harbor.

“They knew we were coming, but know one knew whether we would really make it,” Sacco says. “When we got disqualified, people started booing.”

Besides bragging rights for one of the largest sharks caught in the tournament’s 19-year history, Sacco missed out on winning a $130,000, 23-foot Fountain boat. He also lost out on collecting on the side bet, or “calcutta,” which was estimated to top $200,000. Despite having the biggest fish, Sacco says that “rules are rules and you have to stick to them.”

“The guy who won it won it fair and square. But was it the biggest shark? Absolutely not. He won the prize, but he knows his fish got completely eclipsed,” Sacco says. His shark was so big that when it was cut open, they discovered an entire sea turtle, about 4 feet in diameter, that had been swallowed whole by the beast.

So what did win? It was the combined weight of two 378-pound porbeagle sharks caught by Bobby’s Girl. The largest single shark caught this year behind Sacco’s monster was a 391-pound blue.