Executive Editor Colin Moore spent a few days battling monster muskellunge in upstate New York. Here are some tips he picked up along the way. 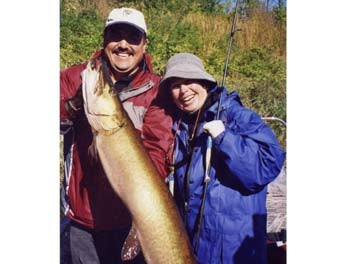 Muskie fishing is usually associated with foot-long lures or live baitfish big enough to eat, but I got to try a third option -buzzbaits-on a mid September visit to the St. Lawrence River country near Hogansburg, N.Y.

I was fishing with William Clute, whose Mohawk Trails Guide Service (518-358-4373) provides access to some of the choice bass, walleye and muskie fishing available in the St. Lawrence River and its tributaries. Last week, Clute and I ran his 19 1/2-foot johnboat several miles up the St. Regis River to fish for muskies with big in-line buzzbaits that he makes himself using dyed bucktail, treble hooks, wire and mail-order propellers.

Clute came upon the idea of using buzzbaits for muskies while bass fishing in the St. Regis. He had enough buzzbaits taken away by the “freshwater tigers” to convince him that muskies are just as susceptible to the topwater spinners as bass. While he will take customers muskie fishing throughout the warm season, his favorite time to head up the St. Regis is during the fall, beginning in September, when river muskies start stoking up for the long winter.

“As the water cools down in September, muskies head for the bank and feed for longer periods during the day,” says Clute, a member of the St. Regis band of Mohawks. “You can catch them on just about any type of topwater or jerkbait, but I prefer to use buzzbaits because you can cover much more water and the strikes are explosive.”

The muskies range in weight from about 10 pounds to more than 40, though no doubt there are bigger fish in the neighborhood. The New York state record muskie of 69 pounds, 15 ounces was caught in 1957 from the St. Lawrence not far from Clute’s hometown.

Typically, the upper reaches of the St. Regis are shallow and studded with rocks and boulders deposited by glaciers in the last Ice Age. The skinny-water obstacle course is why Clute favors a shallow-draft johnboat and a short-shaft engine to push it. Clute has found several deeper pools adjacent to shoals where muskies like to wait in ambush for passing fish. Other good spots include the mouths of creeks that feed the river, as well as coves with heavy weed and lily pad cover.

One day last fall, Clute and two clients managed to land 11 muskies-all on buzzbaits. Though Clute and I didn’t catch anything like that many on our trip, we had enough action to convince me that St. Lawrence muskies are pushovers for the topwater spinners. The smallmouths didn’t seem intimidated by the big buzzbaits, either, as we caught several that weighed to 3 pounds.

Between the muskies and the smallmouths, it was a good fishing day but, heck, any day on the water is a keeper.