The Return of Runt Rods

Go to a short rod when precision casting is in order. 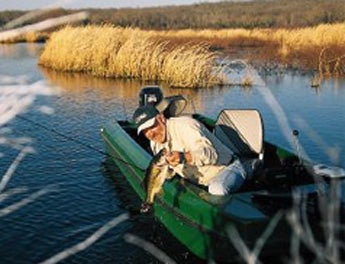 Rods have grown longer over the past few years. Nowadays, we don’t so much as blink at 7 to 71/2-foot casting and spinning sticks that have evolved for specialized techniques like ultra-deep crankbaiting, deep-jigging, deep-drifting, Carolina-rigging and such. Long rods throw a lure far. They move a lot of line when you set the hook-a good thing for baits way out there or down deep.

But I’m here to tell you that short rods are alive, well and enjoying a sort of cult revival among anglers who go after pressured fish. The simple reason is, in a word, accuracy. When you need a rod that will deftly send a lure into a small opening on the first try, go short.

Today’s stubby rods are a far cry from the hockey-stick wrist-breakers with which pioneer bass pros made history. The new breed of short rods has generous tip flex that tapers off quickly into a muscle midsection and really beefy butt. A flexible tip is vital for tack-driving accuracy. Next time you’re at a sports show featuring a trick caster who can pop a practice plug into a whisky glass from 50 feet without seeming to look, check his rod. You’ll find it to be quite limber.

Not Too Whippy
For fishing plastic lures rigged weedless you’ll need a tad more stiffness in a rod in order to slam the hook through the lure skin and into a fish. When you’re fishing exposed hook lures like non-weedless jigs, spinnerbaits, small crankbaits, exposed-hook tubes or natural baits, you can afford a bit more limberness-but only to a point. Overdo it and you’ll start losing more fish to the tight cover, which is where short rods really come into their own.

There’s a pleasantly efficient look about these rods, like a short-barreled shotgun you might keep aboard a boat that plies dangerous waters. I think short spinning and casting rods with limber tips are inherently the most accurate rods built. Cast them one-handed and they become an extension of your arm. I liken throwing baits with them to the natural movement of pointing at a target with your finger. You can cast overhand or sidearm, but where the little sticks really shine is making a wrist roll-cast. I used to call this a circle cast, but, of late, folks describe it as a roll. The important thing is remembering it’s all in the wrist.

To make the cast, let the lure dangle a bit from the tip, then flip it in a little circle over the rod tip and forward toward the target. Let the rod load and do the work. You can also perform the cast backhanded.

On a Roll
Face your target to make the cast, and just before the lure lands, slightly raise your rod tip and thumb the casting reel’s spool or touch the spinning reel’s spool lip. That’ll make for a very soft landing of an even heavier bait.

For years, starting in the early ’70s, bass-oriented short casting rods came only with pistol grips. However, many of us who fished saltwater backcountry casting beneath mangrove branches for redfish and snook favored the more maneuverable straight-grip handle. The G. Loomis company has now started building short sticks with such a straight cork handle.

Bruce Holt, sales and marketing director for G. Loomis, says the company felt pistol grips could block the backhand wrist movement necessary for the backhand roll-cast. “That’ll cause wrist fatigue and hamper accuracy,” says Holt. Still, a lot of folks prefer the pistol grip and most manufacturers offer the configuration on their short models.

A downside of the short rods is the lack of leverage that longer blanks and handles provide to help you set the hook. You’ll find that tucking a short-handled rod into your body and using it and your arms to strike will greatly improve your hookset whether you’re using a casting or spinning model. But the accuracy you gain with a stubby stick more than makes up for any adjustment and the occasional missed fish. If you haaven’t used a little five-foot-plus rod in a while, try one of the new ones. I’m betting you’ll quickly add it to your arsenal.