Spring is the season for plugs that raise a ruckus on top. Check out this new surface lures. 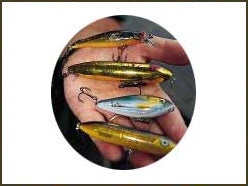 In the old days, topwater lures came with explicit instructions. Typically, we were told to cast, let the bait sit until the water rings dissipated and then make a couple of chugs and wait again. If you didn’t pass out hyperventilating from anticipation between chugs, you’d probably catch a fish. Today the style-especially with cylindrically shaped poppers-is to get them moving as soon as they splash down. The lures should be spitting water and making like little shad-snick, snick, pop, spit, etc.-all the way back without stopping.

Both styles have their drawbacks. A bass, or anything else that might consider eating a topwater bait worked with numerous pauses in the retrieve, could die of boredom waiting for the lure to move again. Conversely, the fast, spitting technique undoubtedly has turned off fish that for one metabolic reason or another simply weren’t up for a chase. The logical question then is, when do you use a retrieve that’s fast, slow or something in between? Add this to the equation: Today our surface lures include chuggers, darters, poppers, propeller (stick) baits, walkers, paddlers and minnow baits. Some of these are designed to do a single thing well while others are intended to produce two or more different actions. We must decide not only which type of bait to use, but when to use it and how to work it.

In early spring experienced anglers usually start out with lures of subtle action, or those capable of a variety of actions. In all cases the lures are worked without a lot of fuss. Lure candidates include a floater/diver (minnow bait) twitched in calm water, or a walking bait. Walkers (Zara Spooks and their ilk) are good on calm or slightly rippled water early in the season.

Poppers and small propeller baits begin producing well soon after. Poppers normally do best in spring when worked gingerly in calm conditions and more aggressively in rippled water-but the opposite can hold true. How do you know?

The Right Rhythm
“Let the fish tell you what they want,” says Jim Gowing, lure designer at Pradco, whose various divisions produce many of today’s most popular topwater plugs. “The main thing is to establish a cadence the fish want on a given day. With a Pop-R or Spittin’ Image, I’ll experiment with three different retrieves until I find what’s hot. I’ll try a one-two-three-stop, a one-two-stop or even a one-stop. Fish pick up on that cadence and know when the bait’s going to stall and be most vulnerable. That’s when they’ll slam it.

“With a walking bait it’s important that you keep it coming steadily without pauses. A fish keys on the rhythm; it knows when the bait is going to hesitate before turning left or right.”

Noisemakers like the old Heddon Chugger produce a big bubble disturbance that more closely resembles a feeding fish than fleeing bait. Poppers in larger sizes or of specific mouth design can produce a similar commotion.

When worked with a sharp twitch, propeller or stickbaits spray a lot of water, but modern poppers can do that, too. Big prop baits like the Gilmore Jumper have become favorite fall lures among bass pros. Propeller baits also can be worked more gently to produce a bubbly action. Some days, fish prefer prop baits to poppers. It may have something to do with the rattling produced by the blades working against their backing cup washers.

Among modern poppers, the classic is the 60 Pop-R. “Most people fish a Pop-R fast to simulate a fleeing baitfish,” says Gowing. “But that’s certainly not the only way.”

How true. In late spring (or early fall) a steady, quick, water-throwing retrieve can be dynamite. As mentioned earlier, however, cooler water dictates more subtle action punctuated by occasional-but gentle-chugs or pops. Some poppers are capable of producing side-to-side walking action to varying degrees. Berkley’s Frenzy Popper was designed to walk bbetter and is the most versatile of the cylindrical poppers available (see sidebar, opposite).

“From previous tests with bass and from data derived from many field tests, we knew what actions appealed to the fish,” says Christopher Pitsilos, a researcher who works with company bass behaviorist Dr. Keith Jones. “We videotaped actions of the top existing poppers and ran them through a computer that analyzed their motions. Our job was to incorporate design elements of the best poppers into the Frenzy, plus add other features.”

Popper Pointers
“We’re not sure bass hear the so-called water ‘spitting’ made by a popper,” says Dr. Jones. “Fish are looking for a bait that displaces water and produces the proper frequencies at the same time. But interestingly, the poppers on the market that caught fish well also spit well-because they excelled at displacing water. Our final evaluation was based on three factors: spray, motion and catch ratios.”

Pitsilos notes that most of the fish caught on the Frenzy Popper seemed to prefer it chugged or walked across the surface. “The Frenzy Popper walks consistently for long periods, rather than a couple of seconds, like some poppers,” he says. “It sits lower in the water, which helps the walking, but also sinks the tail feather lower where it can swing freely. We think that can have a triggering effect with nonaggressive fish in clear water.”

Surface lures might not be as productive throughout the year as some other baits, but they surely are more fun to work. And there’s nothing that beats a surface strike, no matter what kind of fish makes it.