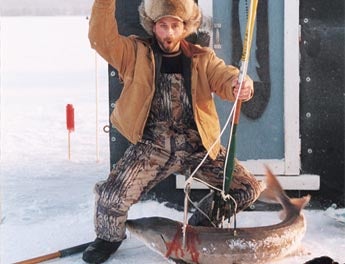 Sure, only five fish a year can be caught-or speared, actually, with a huge seven-pronged trident weighing 30 pounds or better. But that hasn’t kept the sturgeon season at Black Lake near the tiny Michigan town of Cheboygan from becoming one of the biggest parties on ice.

Each year, hundreds gather for the event, which begins February 5 and runs until February 13, or until the quota is reached, whichever comes first. With people drawing for a new chance to combat the fish every day, the season might go a week. Or it might, as it did in 2002, close in 35 minutes.

Get drawn and you can rent a shanty for 50 bucks a day. Real diehards keep GPS coordinates of places where sturgeon have been skewered in years past and tow their shanties to the spot. Then they hack an 8-by-3-foot window in the ice, drop a sucker decoy into the water and wait. Should a sturgeon appear, it’s more about dropping the spear than throwing it. Connect and the only thing to do is hold on for dear life. Some fishermen have been yanked into their ice holes; others have had to kick out the walls of their shanties to make room to fight the fish.

Most of the people at the event never get drawn. For the unlucky masses, there’s plenty of other action, such as mower races, sumo wrestling in an icy ring and a mechanical bull.