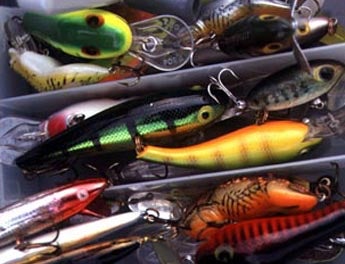 In the ’80s, fishing magazines touted suspending jerkbaits as the “secret baits of the pros.” Arkansas bass pro Larry Nixon was among the first to spill the beans about the lures’ prowess at catching lunker largemouths in early spring. Nixon asserts that rather than relating to some sort of cover, pre-spawn bass often suspend in the water column. In water anywhere from 40 to 50 degrees, these sluggish fish ignore bottom-bumping lures but will take a realistic minnow bait twitched and jerked at their level.

During the period when Nixon and others discovered the pattern, it was difficult to find a jerkbait that would stay in the strike zone, or suspend where the bass were. About the only option was a do-it-yourself project from hell. You had to drill strategically placed holes in a Rebel Spoonbill or Smithwick Rattlin’ Rogue, insert exactly the right amount of lead, test the bait in a bathtub or swimming pool to make sure it suspended and then seal the hole so the lure wouldn’t become waterlogged. It was not a perfect science. Truckloads of perfectly good Rogues and Spoonbills ended up in the trash can, and weekend bass fishermen diverted their attention to other lures they didn’t have to alter. Then Storm Lures began offering stick-on lead tape that promised to make the hand-weighting process a breeze. Anglers experimented with it, but many of them concluded that there was still way too much trial and error involved to make the stick-on weights a viable part of their fishing routine.

Fast-forward to the late ’90s. Manufacturers finally succeeded in making factory-weighted jerkbaits that suspend perfectly. I’ve tried them, and the lures have quickly become my favorite spring go-to bait. But beyond the hype and mystery surrounding these amazing artificials, there’s the question of when, where and how to fish them.

[pagebreak] Best Conditions
Suspending jerkbaits aren’t versatile. They’re capable of operating within only a narrow depth range. Many models dive just 4 to 6 feet when on a steady retrieve. Unlike most other bass lures, suspending jerkbaits work best in cold, clear water but lose their magic in warm, murky conditions. And forget about fishing them around heavy cover-those nasty little treble hooks will snag every weed or branch they touch. Yet within these narrow parameters, they’re absolutely the deadliest bass lures ever created for springtime fishing. Here are the best conditions for using them:

Cold water. Other lures attract bass by producing visual cues, vibrations or rattling sounds when they either swim horizontally, dive to the bottom or ricochet off cover. By contrast, bass often slam into suspending jerkbaits when they’re simply hanging motionless in the water. Their “non-action” takes into account the way that bass behave in cold water. As the temperature of their environment decreases, bass move around less and often suspend to conserve metabolic energy. In 42- degree water, a big largemouth is unlikely to chase down a fast-moving crankbait but won’t hesitate to take a swipe at a half-dead minnow that’s dangling right in front of its nose.

Suspending jerkbaits will routinely catch big bass in water in the low 40-degree range. Conversely, they lose their effectiveness once the water temperature climbs into the 60s, mainly because bass no longer suspend in these conditions but seek out shallow cover instead.

Clear water. Jigs, spinnerbaits and rattling crankbaits work great in water that’s pea-soup green to chocolate brown. That’s not the case with suspending jerkbaits. They’re best suited to water ranging from vodka-clear to slightly stained. “The colder the water, the clearer it needs to be for a suspending jerkbait to produce,” Larry Nixon says. “Once stained water edges toward fifty-five degrees, they’ll work okay, but in colder water, I fish them in the clearest water I can find.”

Vertical structure.re-spawn bass don’t like to make long-distance moves. That’s why you’ll find them hanging around vertical or fast-sloping structures, including bluff banks, deep channel points, 45-degree rock banks, standing timber and stair-stepping ledges running from shallow to deep water-all high-percentage spots for suspending jerkbaits. Sticking close to such structures allows bass to make significant depth changes without swimming far. “A bass on a main-lake flat might have to swim a quarter mile to move from eight to fifteen feet deep,” Nixon notes. “But a bass suspending off a rock bluff would have to move only seven feet to make the same depth change. In frigid water, the less they have to move, the better they like it. A bladebait or jig is designed to drop quickly through the water; they’re best suited to bass holding tight to ledges or on the bottom. But when bass are suspending, a jerkbait stays in their strike zone indefinitely. It’s perfectly suited to the location and mood of pre-spawn bass.”

[pagebreak] Stand-up Routine
“Most anglers work jerkbaits way too hard and fast,” says Tennessee bass pro Charlie Ingram. “They think that since it’s called a ‘jerkbait,’ they should keep the lure darting aggressively with hard jerks and rips of the rod tip. But with these lures, less is more. Overworking the bait with your rod defeats everything a suspending jerkbait is about. On most days, pre-spawn bass want it to be barely moving or completely motionless.”

Ingram makes a long cast, reels the lure down quickly to its maximum depth, pauses, twitches or jerks the bait with one or two light-to-moderate downward or sideways strokes of his 6½-foot medium-action bait-casting rod, then pauses again before moving the bait. “Working a suspending jerkbait is like doing a stand-up comedy routine: your success, or lack of it, hinges on your timing,” he says. “Some days the bass want it barely twitched; other days they won’t take it unless it’s sitting dead still. Let the fish tell you how to work it. If you’re not getting strikes with a jerk/twitch/pause or twitch/pause/jerk/jerk routine, vary the intensity and number of rod movements and the duration of the pauses until you get positive feedback from the bass.”

In the frigid water of early spring, “deadsticking” a suspending jerkbait can be amazingly effective on sluggish bass. This bizarre method is the ultimate do-nothing bass presentation. Another Tennessee fisherman, Steve Dodson, has mastered the technique on J. Percy Priest Reservoir near Nashville. “When the surface temperature hovers around forty-one degrees, usually in late February, largemouth, smallmouth and spotted bass will suspend off steep banks that transition from gravel to chunk rock,” Dodson says. “I’ll cast a Smithwick Suspending Pro Rogue across the transition area, crank the lure down, then stop reeling so it hangs motionless in the water column. Then I’ll let the bait sit there as long as I can stand it-sometimes up to two minutes-before moving it. While it’s dead in the water, I watch my line like a hawk. If it hops, twitches or takes off, I’ve got a bass.”

Using the right rod is critical, not only for presenting a suspending jerkbait properly, but for boating bass. “A stiff rod moves the lure too aggressively for cold-water bass,” Nixon observes. “And many fish will be foul-hooked on a jerkbait because they’ll swim up and roll on the lure, or take a lazy swipe at it, rather than grab it with their mouths. A medium- to light- action rod gives the bait the best action and provides the shock absorption needed to keep foul-hooked fish from ripping free.”

Nixon uses 10-pound-test line with suspending jerkbaits, explaining, “This fairly light line facilitates longer casts and helps give the lure the right look in cold, clear, open water. When you get a strike, simply reel down tight; if you rear back and try to hammer the fish, you may tear the hooks out.” After fishing suspending jerkbaits on several different bait-casting and spinning outfits, you’ll eventually find the one that works best for you. My favorite setup is a 7-foot G. Loomis CBR841C light-action rod coupled with a Shimano Citica 200B reel and 10-pound-test Silver Thread mono. I’ve caught largemouths weighing more than 8 pounds on this combo.

Before stocking up on suspending jerkbaits, keep a few things in mind:
1) Some lakes have huge shad kills in late winter, and a suspending jerkbait mimics a shad’s dying flutter. Silver with a black back is a convincing shad pattern.

2) Trout are an important bass forage in many lakes. Rainbow and “clown” (a combination of red, yellow and white that’s a favorite of pros) are both good trout color patterns.

Before stocking up on suspending jerkbaits, keep a few things in mind:
1) Some lakes have huge shad kills in late winter, and a suspending jerkbait mimics a shad’s dying flutter. Silver with a black back is a convincing shad pattern.

2) Trout are an important bass forage in many lakes. Rainbow and “clown” (a combination of red, yellow and white that’s a favorite of pros) are both good trout color patterns.