Standing timber can be a crappie magnet in summer. Theh fish suspend at various depths, depending on thermoclines. 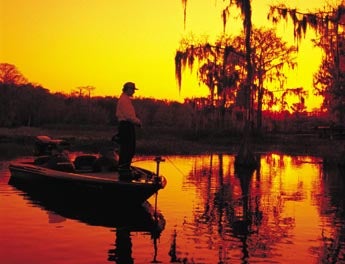 **Spring: **Shallow standing timber and laydowns are Gibson’s favorite targets for spawning crappies at Patoka. “In a normal year the fish will spawn in the timber and logs,” he says. “I’ve seen crappies releasing their eggs on top of stumps that are only a foot under the water.” When the fish are spawning in the timber, Gibson uses 1/16-ounce plastic tubes in a variety of colors and fishes the jigs vertically on 6-pound-test line around the wood cover. He works the jig up and down gingerly to avoid snags.

Post-spawn: Gibson checks standing timber along creek channel drop-offs for suspending crappies. Otherwise, the fish will be in weeds or brush piles. By now, Lindsey is concentrating on areas of standing timber and weeds in fairly shallow water. Crappies in Southern waters will stage in such areas after the spawn, recovering and feeding sporadically.

Summer: “Regardless of where the lake is, I look for standing timber in twelve to sixteen feet of water,” says Lindsey. Even though milfoil might hold more crappies, it’s easier to find fish in flooded trees than it is to pinpoint them in vast mats of milfoil. Lindsey looks for fish suspended anywhere from 6 to 8 feet deep over depths of 9 to 12 feet. His favorite tactic for suspended fish is to dip a plastic tube or hair jig tipped with a minnow next to the timber and present the lure vertically on 6-pound-test line with an 11-foot crappie pole.

River crappies also move to shallow wood cover rather than shoreline weeds in fall. Lindsey looks for laydowns and standing timber in depths of 8 to 10 feet where he presents a 1/32-ounce hair jig on 6-pound-test line. The Louisiana guide lets the jig fall 5 to 6 feet deep and then pumps the lure occasionally as he works it back to the boat.