Make bass lower the boom on a surface lure. 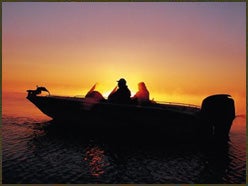 Topwater fishing has to be the most exciting way to catch a bass, mainly because it is the angler who animates a surface lure with his own unique touch. Consequently, when a bass blasts a topwater plug, the fisherman feels a warming sense of accomplishment-especially if there’s a lunker tugging at the other end of the line.

Fishing surface lures is not an easy game, however, because of the great variety of surface types available. It’s far more exacting than worm fishing and more demanding than flyfishing. To prepare you for topwater time, which begins in early summer, let Uncle Homer share some lore with you.

Varied designs over many years offer lures that chug, splutter, burp, pop, hiss, slurp and chortle. Truthfully, most of these plugs sound and look unlike anything that bass regularly chomp on. But such is the art of surface fishing. Instead of appealing to a bass’s appetite, we try to trigger its other hot buttons.

First, whether hungry or not, a bass is a predator compelled by its nature to engulf any smaller creature that appears to be vulnerable. Also, a need to defend its turf-especially when it’s spawning-compels a bass to attack any intruder that comes near its lair.

Properly balanced rod-and-reel outfits are essential for working the various types and sizes of surface lures correctly. A rod that’s too short or stiff won’t cut it. Choose a lightweight graphite rod 61/2 to 71/2 feet long with a sensitive tip. The line should be light enough to cast 1/4-ounce lures and strong enough to hassle big bass out of heavy cover. A practical duet would be 6-pound-test mono on a spinning rig and 15-pound-test on a casting outfit.

Hangouts where bass are susceptible to surface lures include pockets full of aquatic weeds or lily pads, alongside fallen timber or stumps, outside perimeters of boat docks, under overhangs and on steep, shaded banks.

Buzzbaits: These spinnerbaits are designed to run across the surface like a panicked minnow seeking to escape. One or two spinners mounted above the body churn up the water as the lure is retrieved at a constant pace. The trick is to crank the buzzbait over the top quickly enough so that a bass can’t get a sharp look at it, but not so fast that the fish can’t intercept it.

Some buzzbaits stir up a major commotion at a slower speed than the standard models. Always pack some of these in your tackle box, in case you’ll be fishing murky waters.

Sinking Spinners: Both overhead and in-line types perform well at times when bass are looking for a topwater feast. Cast the spinner and quickly begin a retrieve the moment it hits the water, reeling so fast that the spinner blade will revolve just under the surface and make a bulge. This technique can be deadly in calm water in early morning or late evening. A Colorado-type blade works best.

**Poppers: **Cupped heads make these lures pop and send up a geyser of water with just minor movements from your rod tip. If a pop-and-stop retrieve in open water or along the edges of weed beds fails, try a different ploy: First, remember to take along a small rake when you head out for a day’s fishing. At the lake, run your boat into the nearest blanket of surface weeds where you think bass are hiding, and clean out a six- to eight-foot hole. Drag out the weeds in the boat’s path as you leave, if possible. Let the hole alone for an hour or so, then return and work the popper slowly in the opening and along the path you cleared through the weeds.

**Slim Minnows: **Find the retrieve that the bass want that day-twitch-and-pause, jerk-and-dive or a variation in between-and hold on. Sometimes it’s a good idea to add a teaser in the form of a two-inch, white curly-tail grub connected to the line with a snap swivel just ahead of the minnow. Retrieve in short twitches, as if the minnow is trying to catch the little wiggling critter aahead of it. Bass love to crash another fish’s dinner party.

Wobblers: Reel steadily and they flounder over the surface like a crippled creature. Jitterbugs and Crazy Crawlers are two of the best. Trigger tactic: Affix a six-inch, curly-tail worm to one of the points of the rear treble hook, and retrieve the lure in slow motion. Bass just have to bust it.

Walkers: So named because they sashay over the surface when you flick your wrist to twitch the rod tip and reel steadily at the same time with the other hand. The walking retrieve is productive in fairly calm water. When fishing a windy shore, cast the lure out and, the instant it lands, give the plug sharp twitches to keep it slapping over the surface back to the boat.