Even the swimming lures used are keeper-size. 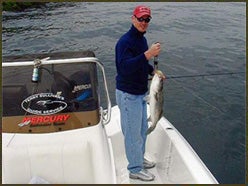 Jim Duckworth firmly believes in the “big bait, big fish” theory when he’s trolling for trophy striped bass on the Cumberland River. Hundreds of huge stripers are caught each year by anglers pulling A.C. Plugs that are as long and fat as a stick of salami. Duckworth has his own favorites. The central Tennessee guide trolls 10-inch, three-piece hand-painted A.C. Plugs made for him by Allan Cole, the lure’s originator. The 10-inch lures will attract stripers that weigh about 25 pounds, although bigger fish may hit them. A 13-inch model, also made by Cole, is Duckworth’s go-to bait for targeting trophy stripers in the 40- to 50-pound class.

Summer is prime time for trolling rivers where striped bass are present. In hot weather, the fish tend to congregate in the cooler water at the mouths of feeder creeks or spring holes. Trolling at night and early in the morning in places where cool and warm water meet can be productive. Stripers often suspend around submerged cover such as downed trees in shady areas along the bank. Casting a topwater lure, such as an Excalibur Super Spook or a Matzuo Spit & Sputter, might result in a hookup if fish are feeding on the surface.

“For someone who is after a trophy, we won’t put anything in the water under eighteen inches and often we’ll go with the big plugs,” Duckworth says. “But it’s hard on your psyche to do it. You might go eight hours without a bite. When you get one, though, it’s definitely a ‘picture fish.’ When the fifty- or sixty-pounders are working, and there’s a fog on the river in the morning, you can hear them chasing bait. You might have six or seven lines out and every one of them will load up with a twenty-five- to thirty-pound fish-and there may be a bigger one in there with them.”

Duckworth fishes from a 21-foot homemade aluminum boat equipped with a MotorGuide Brute trolling motor and quiet four-stroke 10-horsepower outboard. He moves about 3 miles per hour, sometimes flowing with the current if it’s fast enough. When fishing, Duckworth turns off his depth finder to further reduce subsurface noise that may spook the stripers.

For giant stripers, Duckworth trolls closer to the bank, where fish might be positioned around creek mouths or underwater springs. The A.C. Plugs are put out on Cabela’s Off Shore planer boards, which keep the lures about 20 feet off either side of the boat. Duckworth runs one lure 40 or 50 feet back, with the second about 100 feet behind the boat. He might also have two trolling rods on the front deck, paired with lures that work straight behind the boat about 40 feet back.

On days when strikes are few and far between, Duckworth sometimes uses 8- to 12-inch skipjack herrings. He snags the baitfish below river dams on a rig that consists of multiple small gold hooks tied to a weighted main line. Duckworth hooks the minnow through the lips with a Daiichi Bleeding Bait Octopus Hook. He uses 4/0 for small baits, 8/0 for bigger baits and a 12/0 for the largest herring (the 2-pounders, about 20 inches long).

He rigs a bait to run off one side of the boat and an A.C. Plug on the other. The large planer boards keep the skipjack closer to the surface and prevent it from diving into cover. The A.C. Plug has a 4-inch, hand-poured tail and two large saltwater treble hooks. A large Lexan lip gives the jointed plug a wide wobble on or just under the surface.

“I pull these baits over gravel bars that might be three feet deep in a twenty-foot river channel, like where a creek comes out,” Duckworth says. “I’m looking for the ambush points. If I’m pulling live bait, I’ll try to get them close to the bank. But you’re constantly reeling in and putting them out because of the cover. Stripers will hold around standing logs that have washed off the bank. If there is flowing water, they’re an ambush fish. If not, they’re swimminng. They have to have something running over their gills all the time. The bigger they get, the more oxygen they need.”

And the bigger the fish, the more wary they become. That’s why trolling can be feast or famine some days. “I can catch the bigger stripers three out of five days,” Duckworth says. “They’re finicky.”

Patience and determination are required to whip a big striper.

“You just hang on and you do your best,” says Duckworth. “You don’t horse it; you just wear it down.” Typically, when you fish with large plugs or with live bait, a jumbo striper will strike with ample aggression to set the hook itself. Then it’s up to the angler. In smaller rivers, the aim is to keep the fish from diving into cover by watching its direction and turning its head. A strong nylon net with a 26- to 30-inch hoop or a Berkley Big Game Lip Grip is needed to land the fish.

“If I hook a really big fish, I chase it down with my trolling motor and try to keep the line as vertical as possible,” Duckworth says. “This makes the striper have to fight harder, and it tires out sooner. Always keep your rod loaded and your drag set at 70 percent of line strength. This lets the fish run at you, and the rod will pick up the slack and will always keep the hook tight in the striper’s mouth.”

Big stripers can succumb to stress in summer. If the fish is to be released, it can be revived by holding it by the tail beside the boat (with one hand held under its belly) and letting the current work water through its gills until it has the strength to swim away.

“It’s a full-boat operation to land a big fish,” Duckworth says. “The boat catches the striper. Someone has to run the boat, someone has to work the net and someone has to reel in the fish. Decide who will take the rod first before you start fishing. You don’t have time to argue about who gets the rod.”

For information about fishing with Jim Duckworth, visit www.jimduck worth.com, call him at 615-444-2283 or email him at ducktrail@softek.net. Duckworth’s fishing videos are available through his Web site or from Bass Pro Shops outlet stores.