From the Carolina to the Texas, these four setups will cover most of the fishing you do 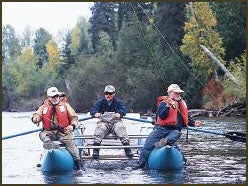 I once had a psychology professor who told me that a good test for anyone thinking about entering the field of psychoanalysis was whether he or she enjoyed undoing a ball of horrendously tangled string.

Well, by golly, in a flash I was mentally transformed from fishing gypsy to respected shrink, solving people’s problems and raking in the big bucks. Then I asked: “How long do you work on the tangle before you cut the thing out?”

So, as a fishing gypsy, I’m here to tell you that the riggings at the end of your line — despite their seeming complexity and occasional tendency to tangle — are not cooked up by some bent behavioral research assistant who specializes in creating rat mazes. They are attempts at dealing with specific fishing situations. outdoor life readers who enjoy a variety of fishing in fresh and salt water (which is most of you, judging by my mail) should be happy to know that the best terminal rigs are not species specific. They’ll catch lots of different fish. Many rigs gained popularity through refinement in the bass or walleye game, though they originated elsewhere. What’s more, you can use them with soft-plastics, natural baits and — sometimes — hard lures. Here is a guide to today’s top rigs.

** TEXAS RIG**
This ground-floor entry point is actually a way of hooking plastic baits to make them snag-free. The hookpoint goes into the soft-plastic lure’s nose and out the side a fraction of an inch below the nose. The hook shank is then pulled through and turned, and the point is imbedded in the bait.

To get their rigs down, early bass fishermen used egg slip sinkers, which evolved into cone-shaped weights that slipped more easily through weeds. Slip weights provide a moment of grace, allowing a fish to suck in your offering, but they also permit lure/ sinker separation in heavier cover. The line slack that results can lead to missed fish. Enter the “pegged” sinker version. Bits of broken toothpicks, rubber stops or special cone sinkers (the Gambler Florida Rig was the first) with tiny screw-wire necks are used to fix the weight either right at the hook or a few inches away. Such rigs turn a plastic worm into more of a jig.

** FINESSE RIG**
Clear-water fish, pressured fish or shallower fish call for less weight and bulk, lighter lines and smaller worms. The original solution was obvious:
a tiny split shot or two (round, not “eared”) crimped on the main line a couple of inches to a couple of feet from the lure. Weight close to the lure lets you present the rig most accurately and to work it precisely through intricate slots; shot spaced farther up the line allows more bait swing, which can be good for finicky fish.

Lately, cylindrical weights that usually are pegged with rubber stops are being used as an alternative to shot. These weights slip somewhat more easily through snags and are available from 1/16-ounce up to one ounce, at which point they hardly can be called “finesse” rigs.

** CAROLINA RIG**
Naturally, fish are in deep water, too, and sometimes suspended above bottom there. Getting a plastic lure or natural bait deep quickly calls for heavier weight. Yet to let the offering ride off bottom and to encourage a fish to take it without resistance calls for a slip sinker. Egg sinkers, available in heavier sizes, became the sinkers of choice for deep water. Today’s freshwater Carolina rig consists of an egg sinker slid on the main line and followed by a sliding bead. The line is then tied to one eye of a barrel swivel. The bead protects the knot and makes sound when the weight clicks against it. Next, a leader is tied to the swivel’s other eye, and a hook to the leader’s end. The leader can be as short as 15 inches.

Sometimes leaders of four to five feet or longer are used, ddepending on water clarity. These things are no joy to cast (sometimes they’re simply lowered) and obviously the entire rig must be shorter than your rod, which is why a seven-foot stick is popular.

Carolina rigs typically are dragged and hopped along the bottom. Live-minnow baits can swim up and down at will. However, it was discovered that when using plastics, moving the rod caused the lure to dart back toward the bottom. Eventually anglers began using floating plastic worms or adding cork or a piece of foam plastic to the leader or inserting them into tube lures to keep the baits swimming high.

Al and Ron Lindner, brothers and Midwestern guides, fine-tuned the same rigging approach for walleyes years before Carolina rigs hit the bass scene. Their leaders were shorter, 12 to 16 inches, to keep natural bait near bottom, and the sinker that developed was a kind of squashed bank sinker bent up in the front. Today it’s known as a walking sinker. It’s better over rocky bottom and can be used with plastic lures, too. A new version called the Lindy No-Snagg was developed recently by Ron Lindner and it gets through lots of stuff easily. The rig is cast and slowly retrieved, drifted or slow-trolled. Especially when it’s used for walleye fishing, you’ll hear the approach called Lindy-rigging or simply “rigging.” It works for bass, northerns, panfish, trout — just about anything.

** DOWN-SHOT RIG
**Even with flotation, the Carolina rig does not present a lure with consistent precision at a specific depth, which is necessary when fish are suspended at a given level and not aggressively chasing. After fish have foraged in shallower water, or in clear water or in cooler weather, they often relate to vertical structure, sometimes schooling just off it. Enter the down-shot, or drop-shot, rig. The setup is most often used with small plastics: four-inch straight-tail worms, tube lures and minnow-shaped lures. When you release tension from the line, the lures drift back. Then, by raising the rod tip, they snap back to their original position just like darting, feeding forage. Such in-your-face presentations normally result in a strike.

To build the basic down-shot rig you tie the hook at the desired level up your line with a Palomar knot. A sinker is fastened to the line’s end. The first sinkers used were simple bell types. Later came those with a small clip (Bakudon or XPS Drop-Shot) that jam-hold the line and allow for quick weight change. Other versions employ cone, cylinder or Lindy No-Snagg sinkers. With the first two you can add a pegged or free-slipping bead below the weight for sound, then a split shot or knot to keep everything from sliding off the main line.

As new components are developed, the list of favored rigs no doubt will change. Right now you can’t do better than these four, all of them proven catchers for much of the fishing you do.