Fish aquatic weeds during the spawn crappies like to bed on types of bottom where vegetation flourishes. 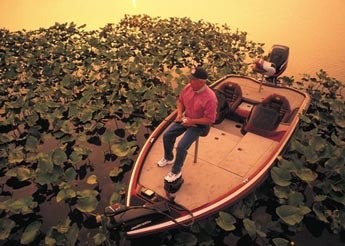 Spring: **Tim Gibson finds crappies staging or spawning in the milfoil at Patoka Lake. He favors 2- to 3-inch curlytail grubs on a 1/16-ounce jighead and 4-pound-test line. He hops the jigs with an erratic retrieve over the tops of the weeds. “In Louisiana crappies are never in the weeds except during the spawn,” says Richard Lindsey, who likes a 1/64- or 1/32-ounce hair jig fished 1½ to 2 feet under a bobber. He casts the rig along weed edges or into pockets of water hyacinths and pops the cork during his retrieve. **Post-spawn: Gibson targets grass beds at the mouths of coves, where he catches crappies until the end of June. The same grub tactics that produced for him in the early spring work again on post-spawn crappies recuperating in the weeds. Lindsey occasionally uses his jig-and-bobber rig around the outside edges of weeds and hyacinth colonies but generally switches to other warm-weather patterns.

Summer: On lakes that develop thermoclines during the summer, Gibson usually finds crappies suspending in offshore weeds. Lindsey targets milfoil for crappies on Southern lakes. He scouts for offshore structure with weeds, especially humps that rise to within 10 to 11 feet of the surface. Gibson lowers a ¼8-ounce plastic tube jig or curlytail grub into tiny holes in the weeds. When fishing milfoil in depths of 12 to 14 feet, Lindsey dips a 1/16-ounce hair jig tied on 4-pound-test line into holes.

**Autumn/Winter: **Gibson returns to his grub-hopping technique when crappies move briefly into shallow grass beds in the fall. “For some reason a lot of people start looking for crappies in deep water. I find my best fishing much shallower,” Gibson says. “Crappies will do the same thing in the fall that they do in the spring: They move shallow because baitfish go shallow. It really amazes me when I see all the people fishing fifteen to eighteen feet deep then. They might catch some small fish, but the bigger crappies are closer to the bank.”