With so many good fishing lines, it's tough to choose. 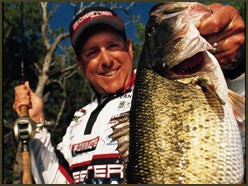 In a manner of speaking, fishing lines have come full circle since I started chasing fish back in the 1920s. In those days, fishing line was made from woven natural materials such as silk and cotton. Now woven lines have caught on again, though the space-age material from which they’re made is much more durable than the old-fashioned stuff.

When I was a kid, Cuttyhunk linen in all pound-tests was a popular braid for everything from panfish to big game. Cuttyhunk deteriorated quickly, however, and came apart under stress-usually with the biggest fish of the day attached. And line care was a real chore. If, upon your return from a fishing trip, you didn’t wind Cuttyhunk onto a large spindle so it could dry out thoroughly, it would mildew and rot. It made fishing more work than play.

It Gets Better
The first braided synthetics, which appeared in the 1930s, were a vast improvement. Chief among them was Dacron, an extruded filament manufactured in much the same way as nylon lines, or monofilament, which hit the market around 1939. Monofilament gradually won the hearts of fishermen because it was cheaper and it cast better on spinning reels, which became popular in this country after servicemen brought them home from Europe in the years following WWII. By the early ’70s, monofilament offered by such companies as Berkley and Stren dominated the market.

The evolution continues today. About six years ago a new family of lines, known collectively as superlines, came stringing into the market. Where nylon is extruded in set diameters that determine the pound-test of each line, superlines are formed from tiny microthreads of polyethylene that are woven together, much like the lines of old.

Initially, the greatest appeal of superlines was their small diameters relative to pound-test: a 30-pound-test superline is about the same diameter as 6-pound-test nylon.

Break Out the Braids
Bass fishermen took to superlines like a hobo to a handout because they let them fish heavy cover for big bass without worrying so much about breaking off. And because braided lines don’t stretch much, hooksets over longer distances also took less effort and were more dependable.

Compared with superlines, mono is cheap and performs well enough for most anglers. While superlines have their place, there are inherent drawbacks to overcome when using them. For example, superline is opaque; some anglers believe that it wards off line-shy bass in clear water. And some bait-casters can’t seem to get along with the line when casting. The coating applied to some braids is so slick that the small-diameter line can cut through several layers of itself when pressure is applied or when the angler backlashes. In either case, the result is the same: a bird’s nest that’s virtually impossible to untangle.

The quickest solution is to cut the superline off the spool and replace it. If a reel is spooled with monofilament it’s not so much of a problem; patiently pick out the backlash or cut it out-chances are it doesn’t involve nearly as many turns.

Take Your Pick
For the most part, line makers have solved the “slick line” dilemma posed by the original gel-spun polyethylene and have introduced new varieties that perform better. The original superline, Safariland SpiderWire (now owned by Pure Fishing), has been joined on the shelves of sporting-goods stores by a number of hybrid braided lines made of space-age materials. Mason Tiger Braid, Berkley PowerPro (a Spectra braid) and Stren’s new Super Braid are among them.

In truth, they’re all good, as is the fluorocarbon monofilament line that is the rage now in bass-fishing circles. Several manufacturers offer it. Like the braided superlines, fluorocarbon has very little stretch. Like nylon, fluorocarbon is reputed to be less visible in the water, which makes it a good choice for clear water onn bright days.

I’ve tried most brands-nylon monofilament, superline and fluorocarbon-and discovered that they perform differently in varying weather conditions or types of cover. I’ve also noticed that some lines cast better with certain types of rods and reels but not as well with others.

Most nylon and flourocarbon lines tend to stiffen in cold weather and coil up off the reel spool. Cast control suffers. The modern braided lines are impervious to temperature changes. They also will cut through weeds and stand up to wood cover better than monofilaments. However, there are special nylon monofilaments with polymer coatings that withstand abrasions better than non-coated monos (Stren Heavy Cover and Trilene XT, for instance). For casting ultralight lures from spinning reels, nothing beats nylon or flourocarbon mono. For year-round fishing with a bait-caster, braided line is my pick.

If cost is a factor in your fishing, nylon monofilament is the most attractive option. Depending on the pound-test, it’s possible to buy a spool of serviceable monofilament for less than a penny per yard; fluorocarbon might cost more than 5 cents per yard and a braided superline will sell for 7 to 12 cents per yard, on average.

My advice is to do as I have done and try each one to see which fits your particular fishing needs best.