A weekend course is a great way to get your waders wet. 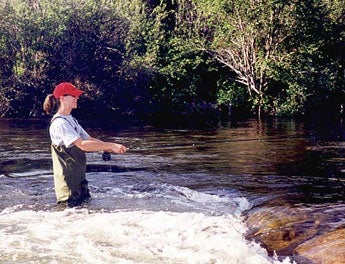 We made our way out carefully in pairs, arms on each other’s shoulders for support, into the tumbling waters of the storied Beaverkill in New York’s Catskill Mountains. Taking position on the river, we began casting, our fly rods working rhythmically in the sun to send out line and put down a perfectly presented…piece of bright orange yarn.

Okay, so it wasn’t exactly the real thing. But to each of us at the Wulff School of Fly Fishing, it was just as exciting. It was Sunday morning of an intensive weekend course, and we were finally off the ponds, out of the cabin classroom and on the river where we longed to be. The yarn was just a reminder of our student status-“Take 10 of you out here at a time with real flies?” an instructor said. “Now that would be dangerous.”

I had come to the Wulff School-founded by America’s premier female flycaster, Joan Wulff, and her late husband, the legendary flyfisherman Lee Wulff-because I wanted to formally learn the basics of a sport I’d tried a couple of times since joining the staff of Outdoor Life. And a weekend course, especially in such a beautiful setting-with a turn-of-the-century inn nearby and my husband along as fellow student-seemed a great way to do it.

As it turned out, it was (more about that later), but what struck me as we sat in our first-night orientation was the number of women who were enrolled-11 in a class of 20. When I asked if the mix was typical, I was told that, if anything, there were usually even more women. And not all of them were there with spouses. Three had come up together from North Carolina, for example, and were planning to stay an extra day to fish with a guide-their husbands weren’t into the sport at all.

Back in the office, I began to investigate the link between women and flyfishing. According to the American Flyfishing Trade Association, 16 percent of all flyfishers are women, or about 1.2 million (1996 figures). Nancy Zakon, founder of Juliana’s Anglers, a women’s flyfishing club in New York, estimates that about 50 such clubs now exist in the U.S., and attempts are being made to unite them in a national network. There’s even an International Festival of Women Fly Fishers, which drew 150 women from around the country to its third annual event, held in Sun Valley, Idaho, in May.

What is it about flyfishing that’s so appealing to women? Personally, I think it has something to do with the art and grace of casting itself-never mind whether you catch any fish-and the seemingly endless challenge of mastering the technique. Other women say it’s the beauty of the places you flyfish and the almost Zen-like relaxation of the sport-nothing, of course, that men haven’t always enjoyed, but perhaps even more meaningful to overstressed women juggling careers and families. “Our lives are so hectic, it’s a great break,” says Susan Dixon, one of the North Carolina trio who attended the school. “When I flyfish, absolutely nothing else is on my mind. At the end of the day I feel completely relaxed.”

Finally, it may be what Joan Wulff herself says: “Flyfishing isn’t about strength; it’s about speed.” This is a sport women feel they can do well.

Given all that, it’s not surprising that the first book in English on flyfishing-A Treatyse of Fysshynge wyth an Angle (1496)-is widely believed to have been penned by a noblewoman and nun, Dame Juliana Berners.

[pagebreak] Full Immersion
If you, too, have dabbled in flyfishing, or would like to try it, consider attending a course like the one offered at the Wulff School. You don’t need any special equipment or experience to start, and you’ll have a great time while getting a thorough grounding in the sport.

But don’t go if you aren’t willing to work…hard. Our weekend began after dinner on Friday evening, with a video and some beginner’s exercises using rod butt sections. That night we were asked tto skim the first 50 pages of Joan’s book, Fly Casting Techniques, in preparation for the next day. Saturday we were back at the cabin classroom at 9:00 a.m., and the day’s lessons continued inside and out-there are three ponds on the property-until 5:00 p.m. After dinner we were given a fly-tying demonstration and watched a spectacular video of Lee Wulff catching several large species on a fly. Sunday the lessons again went from 9:00 to 5:00.

There were five instructors plus Joan, so the degree of personal attention was high, with someone always nearby as you practiced your casts.

Often it was Joan herself-her enthusiasm for teaching is one of the most motivating things about the course. Whenever another instructor was giving a talk-on line weights, on the dynamics of a stream, on playing a fish-she was listening in, often adding a helpful piece of information to make a point crystal clear. Her tough prodding mixed with encouragement (“Thumb to the forehead”…”You’re wristing, Camille!”… “That’s it, great cast!”) stay with you long after the weekend is over.

Instant Feedback
On Saturday afternoon, each student is videotaped making several basic casts, and the experience of watching yourself on film-seeing, in most cases, just how much you’re doing wrong-is a highlight of the weekend. But nothing can beat the exhibition of distance casting that Joan gives on Sunday afternoon (for 17 years she was U.S. champion in at least one of six casting divisions).

The Wulff School covers the gamut of what you need to know to get started. There’s even a session in which the class rotates around the ponds, trying out rods from about a dozen manufacturers to see which one feels best for your style. Lectures in where trout lie, in wading, in tying knots and in aquatic insects (held on the banks of the Beaverkill, with specimens caught on the spot for demonstration) provide a comprehensive basis for the novice flyfisher. In fact, there’s probably too much information to absorb; beginners, of course, will need to revisit much of what they’ve learned as they get further into the sport.

For those who are more experienced, the hands-on instruction in casting is particularly worthwhile. Dixon, who had been flyfishing for about three years before coming to the school, says, “I was amazed at how much I improved. It was the first time I could actually see a point and cast and get there, doing what Joan told me to do.”

When the course was officially over on Sunday afternoon, my husband and I lingered awhile and asked if we could grab some rods and practice our casting on one of the ponds. Dave Brandt, an instructor, saw us and said, “Don’t you want to put a real fly on that rod?” We didn’t want to impose, but he kept offering-and smiling-so we finally took him up on it. Dave helped me choose a fly and the correct leader, and within minutes I hooked an eight-inch brown trout and brought it to the pond’s edge, where Dave released it. My own excitement was matched only by his. And this time, it was the real thing.