The World’s Most Deadly Fish

Think you're a tough guy? These five fish will reduce you to tears if you're lucky and rip you to shreds if you're not 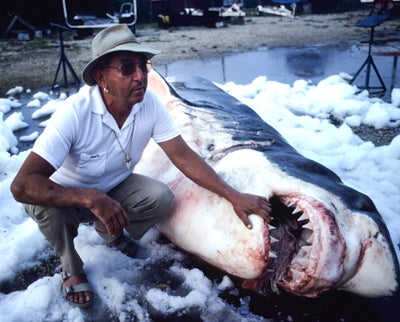 The worst of the scorpion fishes, the stonefish bears a toxin comparable to that of a cobra. This small but horribly ugly creature lives in coral reefs in the Pacific and Indian oceans and is camouflaged to resemble a coral lump. If you are “spined,” the pain is instantaneous. In 10 minutes you’ll likely collapse, thrashing and raving maniacally. If you survive six hours you’ll probably live, though flesh near the wound will have sloughed away, your joints will ache and it will take a year to regain good health.

Based on its size, strength, fearlessness and preference for feeding on marine mammals—as well as divers, swimmers and even kayak hulls—the great white is the deadliest shark. These prehistoric survivors grow to thousands of pounds.

Many shark species can do you in, but the bull makes this list because of its abundance, vile disposition and common occurrence near shore in turbid water, where the fish is rarely seen until it attacks. Bulls also adapt to fresh water and roam far up major rivers.

Otherwise known as the box jellyfish, this member of the Cubozoa clan (not a true jellyfish) is about as big as a basketball, with 60 nearly invisible tentacles trailing up to 15 feet behind it. It calls the Indio-Pacific region home. Not everyone who comes into contact with those tentacles dies, but the excruciating venomous sting causes vomiting and breathing and heart problems.

This translucent, yellow-eyed, eel-like parasitic catfish grows to a maximum length of one inch. It cannot kill you outright, but if you experience the wrath of one, you might wish it had. A native of the Amazon, the fish has a penchant for swimming into urethral openings of unprotected bathers—men and women alike. Once inside it pops open its spinygill covers, which prevent it from being pulled out. The ensuing shock and infection have caused death, as has hemorrhaging resulting from attempts to remove it. Delicate surgery might be required. Also, the juice of two native fruits high in citric acid, both drunk and used externally where possible, can dissolve the gill spines and kill the fish.