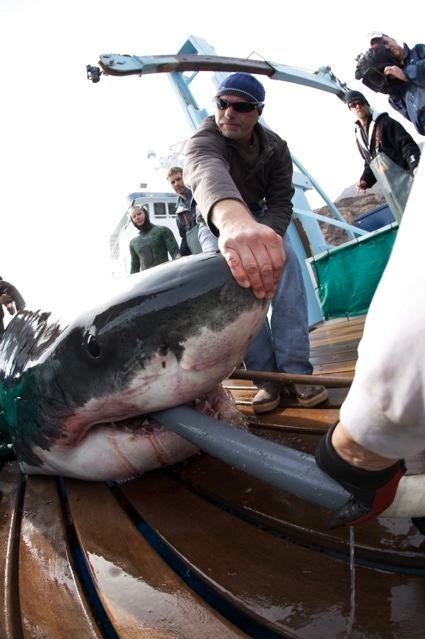 Dr. Michael Domeier, president of the Marine Conservation Science Institute, has been hard at work attaching satellite tags to great white sharks off the coast of Guadalupe Island, near Baja, California. Great white sharks–many of which reach 4,000-pounds–are extremely difficult to catch or keep in captivity, so close-up scientific studies have been limited in the past.

But with the help of expert big game anglers Chris Fischer and Brett McBride, Domeier is able to catch the sharks, conduct brief research and take samples, and then release the fish back into the water using a large forklift. It’s groundbreaking work that will hopefully yield valuable data about sharks’ migratory patterns, feeding habits and swimming behavior.

Outdoor Life caught up with Dr. Domeier in between his fishing expeditions.

OL: How did you, personally, become interested in great white sharks?

Domeier: I got into white shark research completely by accident. I was studying bluefin tuna in the eastern Pacific and traveled to Guadalupe Island with another great angler, Tom Pfleger, to satellite tag the really big bluefin that had been caught for years at Guadalupe. Tom and I searched for bluefin at Guadalupe for two consecutive years, but they had all disappeared. Instead, we found great white sharks and eventually stuck a few satellite tags in them because we couldn’t use them on bluefin, and we couldn’t resist the temptation to tag the huge sharks.

OL: How does working with Great white sharks compare to some other marine work you’ve done?

Domeier: The great white shark has been one of the most rewarding species I have ever worked with. In conjunction with satellite tagging, I developed a method for identifying individual sharks and we soon discovered the same individual sharks return to Guadalupe each year. Being able to keep tabs on individuals over span of many years opened the door to fascinating science.

OL: Have you had any close calls thus far?

Domeier: I refused to get into the water at Guadalupe without a shark cage; to do so is reckless. I’ve had a few sharks get a bit frisky with the cage and the boat. In fact, I was once standing on top of an outboard motor to tag a shark and the shark came up and bit the motor, almost knocking me in the water. On another occasion, I leaned onto a railing to film a shark eating bait and had the gate open. As I was falling into the mouth of the shark someone grabbed the back of my belt and pulled me back. But these are situations that I created, not situations the shark created.

OL: What was it like working with Chris Fischer and Brett McBride–both renowned big game fishermen?

Domeier: Chris Fischer and Brett McBride have taken a huge load off my shoulders. I trust them implicitly and they have made my life so much easier in that I don’t have to worry about every aspect of these expeditions. They have brought a lot to the table and we’ve developed tremendous mutual trust and respect. Although I have made a career out of catching things so that I can study them, I don’t have to stress about catching these sharks. Chris and Brett said they would catch them for me and they did. The key was the hydraulic lift. I know a few people who could catch the shark, but Chris is the only person I know that can lift it out of the water and then drop it back when I’m ready to release it.

OL: Fischer stated that, in many ways, this expedition is the first time that big game fishing has teamed up with science in such a substantial way. In your opinion, has the union been successful?

Domeier: Oh yes, our partnership has been very successful. We are catching, tagging and releasing the largest white sharks in the world, ever. Period.

OL: What’s the dynamic like on the boat? Specifically, is there a lot of downtime?

Domeier: There can be a lot of downtime on the boat, particularly during the travel to and from our study sites. A few months ago we organized a trip to see why our tagged sharks hang out in the middle of the ocean, halfway between California and Hawaii. That was too much downtime, since we were traveling for about three weeks.

OL: What’s the whole process like? What exactly happens when you get a shark on the line?

Domeier: Once we get to Guadalupe, things are pretty busy. For me the most exciting time is seeing a shark show up and watching it take the bait. I have often been the one fishing and hooking the shark and I must admit, it is a thrill. Once the shark pulls all the line and floats out of my hands my job is over; Chris and Brett go do all the hard work. Of course, there’s a lot for me to do once we pull the shark out of the water.

OL: How has the rest of the scientific community responded to your work with the great whites?

Domeier: I haven’t shared my methods or results with my colleagues–yet. In reality, it takes years to accumulate data and get it published in the scientific literature. I will be presenting my data for the first time at an International White Shark Symposium that I am organizing for Feb. 2010 in Hawaii.

OL: From your research, what are the most significant misconceptions that the general public has about great white sharks?

Domeier: Great white sharks are not monsters. They are highly evolved and successful apex predators. They do not actively pursue and hunt humans; yes, occasionally humans present themselves to white sharks in a manner that invokes a predatory response, but we are definitely not on their preferred menu. This is no different than other apex predators, like lions or tigers, that occasionally attack humans. We should all be more concerned with the person texting his girlfriend in the car next to us.

OL: What’s next for the Great white expeditions and research?

Domeier: We are going to continue to study the adult great white sharks at their aggregation sites, but I’m also very interested in studying sub-adults; I want to know how they manage to find these adult aggregation sites when they are approaching maturity. Furthermore, how do they learn to migrate into the middle of the ocean?

OL: Do you have any other thoughts on the Great white expedition or the 10-year experience that you would like to share?

Domeier: We have made tremendous inroads into the life history of great white sharks in the northeastern Pacific. But none of it would have been possible without the support of key people like Tom Pfleger, Paxson Offield, Guy Harvey, the Guadalupe Island Conservation Fund and, of course, Chris Fischer.