Fall lake turnover might sound foreboding, but it can actually signal the best time of the year to fish for largemouths. 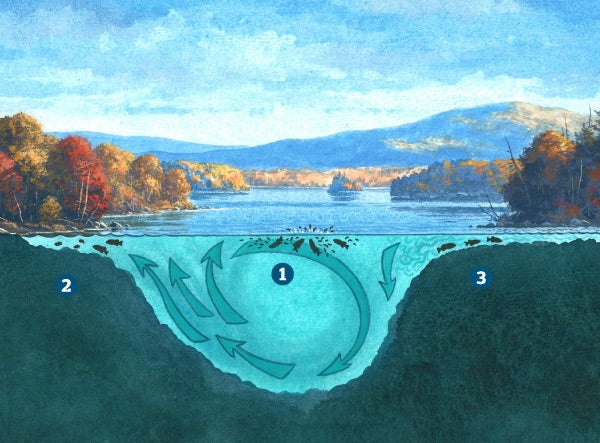 Bass anglers have learned over time that it’s much easier to pattern their quarry when the fish settle into an area for an extended period. Still, there are two seasons of the year when the fish they pursue really go on the move: spring and fall. Spring is spawning season and fish are coming out of their deep-water winter haunts and moving shallow to find appropriate habitat for reproduction.

In autumn, the trigger for dramatic changes is a phenomenon known as fall turnover, when the lake, which has been stratified during summer, develops a uniform temperature and dissolved oxygen content. When fall turnover occurs, the thermocline disappears and fish can be anywhere, moving from specific structure to open water. Anglers looking for fish during fall turnover are starting from scratch. Or are they?

“To me, what ends up happening more than anything else is that the whole smorgasbord–bluegills, minnows, perch–tends to move up on the flats,” says Mark Zona, a sometime tournament angler from Michigan. “Watch the panfishermen. When the lake starts turning over, they go shallow.”

But the process is a progression, Zona says, and anglers can tell when the lake has thoroughly mixed.

“It generally happens in November where we fish [southern Michigan]; for about a week, the fish will be everywhere,” Zona says. “You’ll see them feeding on top everywhere–there will be fish on the surface in five feet of water and fish on the surface in thirty feet of water. The food chain is moving and the bass are moving with it. It scatters the fish that have been schooled up all summer long.”

“It’s an absolutely amazing phenomenon when it occurs,” says Frank Campbell, who guides bass anglers on the Great Lakes and connecting waters around western New York. “Those are the times that you can catch a hundred to three hundred fish a day. Those fish go on a feeding frenzy then.”

According to Campbell, the fish will seek out a comfort zone, which often causes them to suspend in the upper reaches of the water column or in feeder streams, where current stabilizes the temperature.

“Try the river mouths or anyplace with a harbor that has a creek flowing into it,” he says. “That’s when you might find all the fish from a ten-square-mile area bunched up in one square mile. It will void areas, too, no doubt about it. There will be places where you’ve consistently caught fish, and then, all of a sudden, there are no fish there.”

Zona says the only way to find fish is to fish top to bottom. His single favorite method is to swim a grub, starting near the top and counting the bait down until he begins to make contact. Even bites from perch or bluegills will tell you the level the fish are occupying. “You find it by experimenting,” he says.

As fall moves forward, the coldest water is on the surface, where the ice will begin to form. The denser water, which is above freezing, sinks, and fish move deeper to stay in it. Zona likes to move to the outside edge of weeds, the deepest water with appropriate cover, which is often the same place he catches fish during the summer months.

Every lake has its own quirks, however. The lakes that stabilize quickest are wide-open lakes, where the wind can mix the water. In some lakes the fish might move to 12 feet, and in some lakes it might be 40 feet. But in late fall, those fish are as deep as they’re going to get. They can even be taken in 60 feet of water in South Carolina and Georgia during turnover.