A weekend trek up Route 7 from northwestern Connecticut to Burlington, Vermont, will deliver you to the crucible of Northeastern... 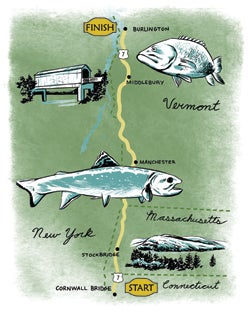 A weekend trek up Route 7 from northwestern Connecticut to Burlington, Vermont, will deliver you to the crucible of Northeastern freshwater fishing. But what many insiders won’t tell you is that this trip doesn’t feature just trout, but also bass, northern pike, and even huge carp. Renowned Supreme Court Justice Oliver Wendell Holmes said it best: “There is no tonic like the Housatonic.” Surely he was talking about the fishing in the river at Cornwall, Connecticut. The clear, cold water here provides prime flyfishing for trophy brown trout and smallmouth bass, especially in the upper Trout Management Area from Falls Village down to the Route 4 bridge.

Next, head into the heart of the Berkshires. The Housatonic near Great Barrington becomes a slow-moving river with deep holes that hold bass and northern pike. The river north of Great Barrington features big carp.

Just up the road in Stockbridge, the historic village center boasts a great catch-and-release area from the Glendale Dam (along Route 183) to the railroad bridge. Toast your catch with a pint at the Barrington Brewery on Stockbridge Road.

Cross the Vermont border to trout nirvana. Catch fish right in downtown Bennington on Route 7 (North Street), in the Roaring Branch. Or hit the Batten Kill, not far from Orvis headquarters in Sunderland, and strip olive Woolly Buggers for holy-water trout.

A side trip on Route 67 puts you on the riffled water of the Walloomsac River below picturesque Henry Covered Bridge. Lastly, ditch Route 7 and launch a boat in Addison, fishing Lake Champlain all the way up to Burlington’s waterfront district. The lake’s shoreline structure features the best smallmouth bite in New England.