It’s called “Flyover Country” by snooty residents of the coasts. But these jet-setters wouldn’t be so dismissive of the Midwest... 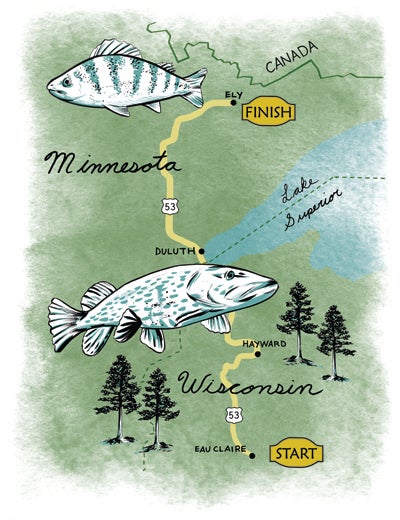 It’s called “Flyover Country” by snooty residents of the coasts. But these jet-setters wouldn’t be so dismissive of the Midwest if they took a drive through the region in the late summer with a cooler of bait in the trunk, a medium-action rod, and a canoe strapped to the top of their car. They would see dozens of well-kept towns and local-hero landmarks, corner stores that double as community centers, and, on the drive north, orderly farms and fields that transition to towering pines and birch wilderness.

I would put them on U.S. Highway 53, bound for northern Minnesota’s legendary Boundary Waters Canoe area, home of nearly infinite fishing destinations and America’s wildest country east of the Rockies.

This North Country journey begins outside Eau Claire, Wisconsin, where a slice of banana cream pie at the Norske Nook celebrates the unlikely marriage of tropical fruit with Midwestern pastry baking. Divert east to the Freshwater Fishing Hall of Fame in Hayward. The giant fish statues and historical photos of freshwater monsters will inspire you to buy more bait as you amble back to the highway and head to Gordon, Wisconsin, where the St. Croix River flowage offers smallmouths and muskies just off the road. A few miles north puts you in Solon Springs, at the head of the famed Brule River.

In Duluth, the hardbit city at the snout of Lake Superior, order a draft of Lake Superior Ale at Sir Benedict’s or grab a burger at Grandma’s Restaurant to fortify yourself for the next leg.

Get an overview of Minnesota’s historic Iron Range at the Museum of Mining in Chisholm, then cross the lowest-slung continental divide in America, the Laurentian Divide (1,837 feet above sea level), which separates the Hudson Bay drainage from the Mississippi River basin. From this height you can see the constellation of lakes that stretches to the Boundary Waters. In Ely, load up on camping supplies at Piragis Northwoods Outfitters and on tackle at Canoe Country Outfitters. Chat with locals about the best bays for walleyes and weed beds for northern pike at the bar at the Ely Steakhouse.

Pick up required backcountry permits and fishing licenses at the nearby ranger station, and grab a bunk at the rustic Silver Rapids Lodge. From there, it’s a quick jaunt to the Moose Lake boat landing, where epic road trip stories end and summer fish tales begin.