The Outdoor Life Fish of the Year

The votes have been tallied. Here are the 10 finalists in the annual Outdoor Life Fish of the Year contest. 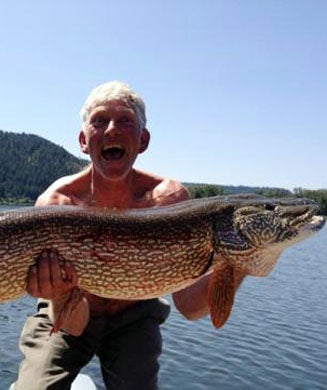 The polls are now closed and the votes have been tallied in the annual Outdoor Life Fish of the Year contest. Check out some of these awesome catches made by some equally awesome anglers. Congratulations to all 10 finalists and a special thanks to the good folks at Eagle Claw who will award our winner with a prize package of products.

After fishing for five hours without a strike, Jennifer Vance of Issaquah, Washington was just about ready to throw in the towel. But she hung in there for a few more casts and took this nice 20-inch rainbow–her biggest trout ever. She released it to fight another day.

C. Stover was fishing the Cheasepeake Bay Bridge Tunnel complex last spring when this huge black drum scarfed down his live bait. A great battle ensued until he boat the 55-inch, 90-pound brute. It was tagged for the Virginia Institute of Marine Science and released.

11-year-old Alexis Lemaire gets bonus points. First, she caught her limit of redfish “in no time” while out on the Neches River in Southeast Texas last June–including this 9-pounder. Second, she wore her life vest the entire time. We can all take a lesson from this savvy youngster. Way to go Alexis! Nice work!

Indiana angler Dan Bettag knew it the instant he saw it.

“This is my fish of a lifetime!” he thought to himself.

Bettag caught several other fish on his March foray, but when this 8 ½-pounder jumped out of the water with a 3-inch bluegill swimbait hooked in her lip, it was game on. After a few pictures, he watched it swim away.

“We have to keep these genetics around,” he said.

What could be better than catching a fish that weighs more than you do? Maybe catching it with your Dad and Grandpa in the boat. While jigging near Vancouver Island, 11 year old Brandon hooked up with this monster halibut. With an assist from the rod holder, the proud youngster brought the big barn door boatside where his equally proud Pop and Grandpa provided the coup de grace with a harpoon.

Lorell Long of Penryn, California was trolling the Sacremento River last fall when a big coho knocked down one of her lines.

“Three boats stopped to shout advice,” Lorell says. “And I had two coaches on board. I just HAD to catch this one.”

After a 45-minute battle, the 23-pounder came to the net–and then it jumped out!

“I had to catch him twice. The folks in the boats all applauded.”

It was mid-afternoon and the hottest day of the year on Lake Coeur d’Alene, Idaho. Eric York’s fishing buddies were ready to call it a day.

“I suggested one last spot, an L-shaped weedline, next to a deep-water hole,” says York. “While one man fell asleep and the other was hot on the trolling motor, I made my last cast from the back of the boat and WHAM, I caught my biggest freshwater fish ever, and all our eyes were popping.”

Nathaniel Melton hammered this great northern in Ontario. His description is short, concise and to the point:

“This monster slammed a spinner with a artificial minnow. One of the hardest fighting fish I have ever caught. Took some pics and released it.”
It measured 39.5 inches.

There’s really nothing easy about taking a muskie through the ice, let alone a giant. However, Jeramiah Korbisch of Madison, Wisconsin did both. His biggest ever fish weighed 38 pounds and measured 53 inches.

Winner: The Outdoor Life Fish of the Year

Big, gorgeous and just plain awesome! William Engber of Madison, Wisconsin travelled to Red Belly Lake in Nunavut, Ontario last year to claim the No. 1 prize in the Outdoor Life Fish of the Year contest. This beautiful 38-inch char was in full spawning regalia when taken last August and was estimated to have weight 20 pounds.

“These bright fish are available for only four to six weeks per year in the far north,” Engber says. “He was carefully released to complete his mission.”