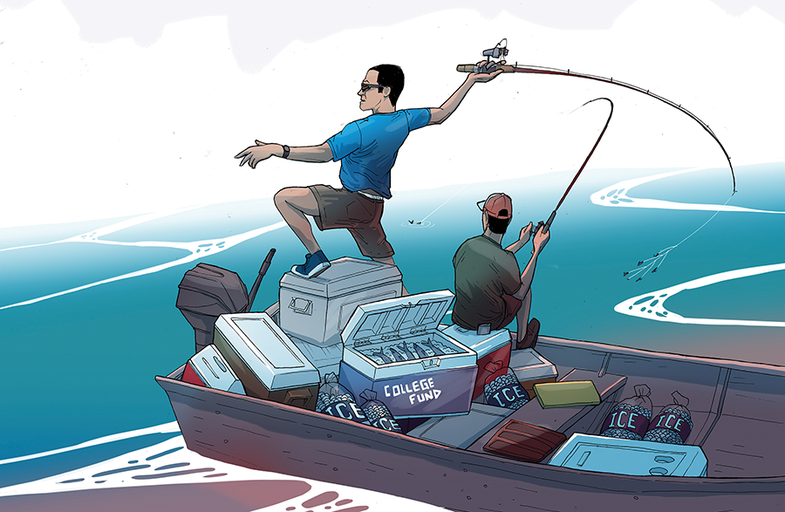 Shooting trap competitively is an expensive hobby. Tyler Moses understood this, especially after his parents divorced. “I was pretty good at shooting, and had won state and competed in nationals by the time I was 14. But after the divorce, we really couldn’t afford it.”

That is, until Tyler walked into a bait shop near his hometown of Florence, Alabama, and saw shad guts for sale. “I couldn’t believe people bought that. So, I figured it would be an easy way to make money to help keep me shooting.”

He and his brother, Michael, then started going below dams on the Tennessee River to catch skipjack herring. They knew the owner of the bait store, and he eagerly bought the skipjack to resell to catfishermen.

“It was really nothing official in the beginning. But eventually, we started making contacts, and when the catfish tournaments would come to town, competitors would actually call us to order bait. We’d have skipjack when nobody else could catch them.”

Now 21 years old and attending the University of South Alabama in Mobile, Tyler has made it official. The Moses brothers’ T&M Bait Co. is the go-to supplier for the most serious tournament catfishermen in the country, including the legendary Bill Dance, as well as a half dozen bait stores in northern Alabama and southern Tennessee.

“The serious catfish anglers know that freshly dead bait is important. And how you treat bait as soon as you catch it makes all the difference in the world,” Tyler says.

Unlike most freshwater bait, skipjack must be caught on rod and reel. This makes the process slow and often frustrating for the casual bait pursuer. Tyler, though, has the process honed to a fine science.

“We use sabiki rigs, like the saltwater guys use. That way, we can land multiple fish at a time. The trick, though, is to be able to land several fish and quickly get them off the hook without destroying your rig or hooking yourself in the process.”

Typically, the Moses brothers will launch their oversize aluminum boat at daylight and head for the tailraces of Pickwick, Wilson, or Wheeler dams, sister impoundments on the Tennessee River. As skipjack are sight-feeders, it does no good to try to catch them at night. Once they find a current seam holding the bait, they cast the multi-hook rigs for as many times as it takes to fill their coolers. A 10-hour day is not unusual.

“We throw the fish on ice immediately and keep layering ice between catches. If you skimp on ice, the fish will overheat and turn mushy—worthless as bait.”

If there is not an immediate need for the skipjack, the brothers vacuum-seal the bait and keep it in one of eight freezers they maintain in their garage. The profits from the bait business have been shifted from competitive shooting to getting through college. Michael is currently attending the University of Alabama, Birmingham.

“We work our tails off in the summer to fill the freezers with good bait. Then, during school breaks, we get back out to catch as much as we can to make it through the winter.”

Catch ‘Em Up
“Skipjack are predatory and can grow up to a couple of pounds. So use small but strong hooks. A little Twister Tail is a great bait if you don’t want to fool with a sabiki.”

Rig ‘Em Up
“For catfish, I walk a piece of cut bait with the current. To do this, tie a three-way rig where your weight is about 18 inches under your line tied to the hook.”